Fire in the hole

You know it's not a good thing when you're waiting at a traffic light and the driver behind you walks up and knocks on your window..........

We were spending a week in Napa and Sonoma taking care of errands and catching up with friends. While moving the rig from the Calistoga Fairgrounds to Santa Rosa Fairgrounds, we were stopped at one of the busiest intersections in the area when the knock came.

"Do you know that the back of your rig is burning?"

That got our attention!

Running to the back of the rig, smoke was pouring out between the gaps in the passenger side rear tail lights. We scrambled for the fire extinguisher inside the rig and returned to see that flames were now leaping out amidst the smoke. By the time the fire extinguisher was empty, the flames were out. After unplugging and disconnecting every electrical connection we could and making sure there was no smoke or fire inside the rig, we were able to stop traffic long enough to pull off the main road onto a side road. By then two engines from the Santa Rosa Fire Department had responded to the scene.  All of this took about five minutes.

The fire department identified the source of the fire as the shorting of two wires leading to the tail lights. 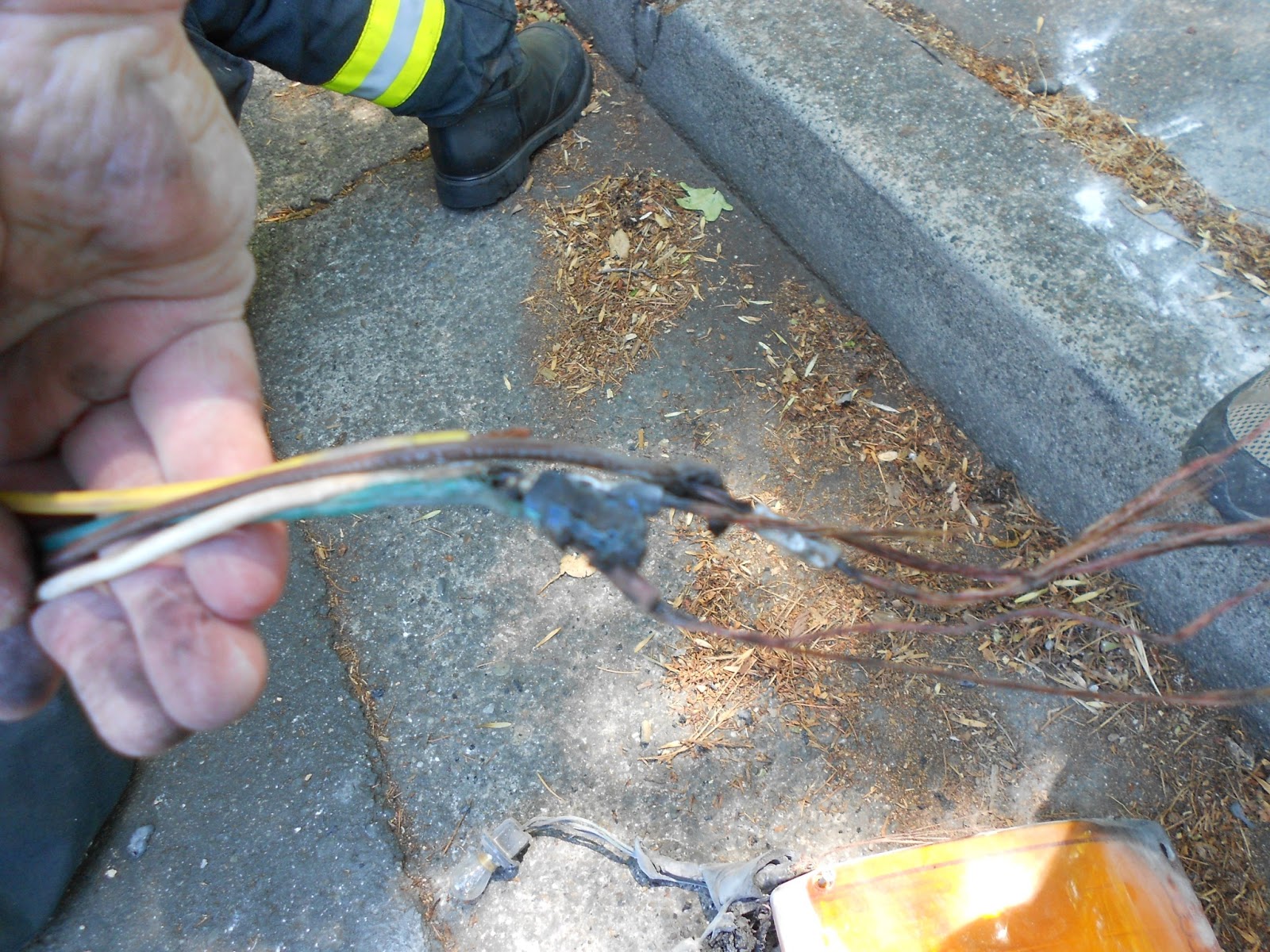 When the wires shorted and heated up, the plastic in the tail lights began to burn. 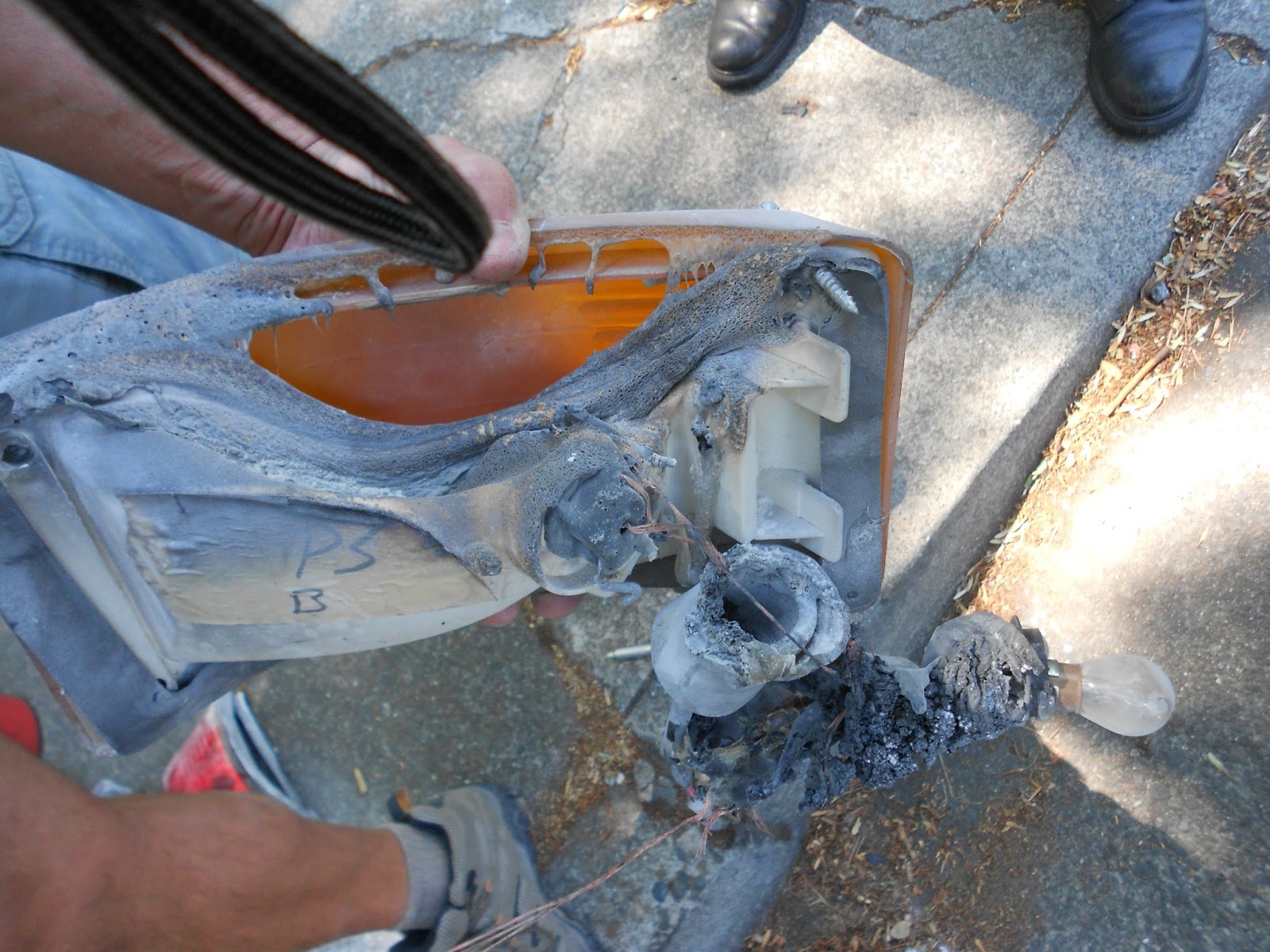 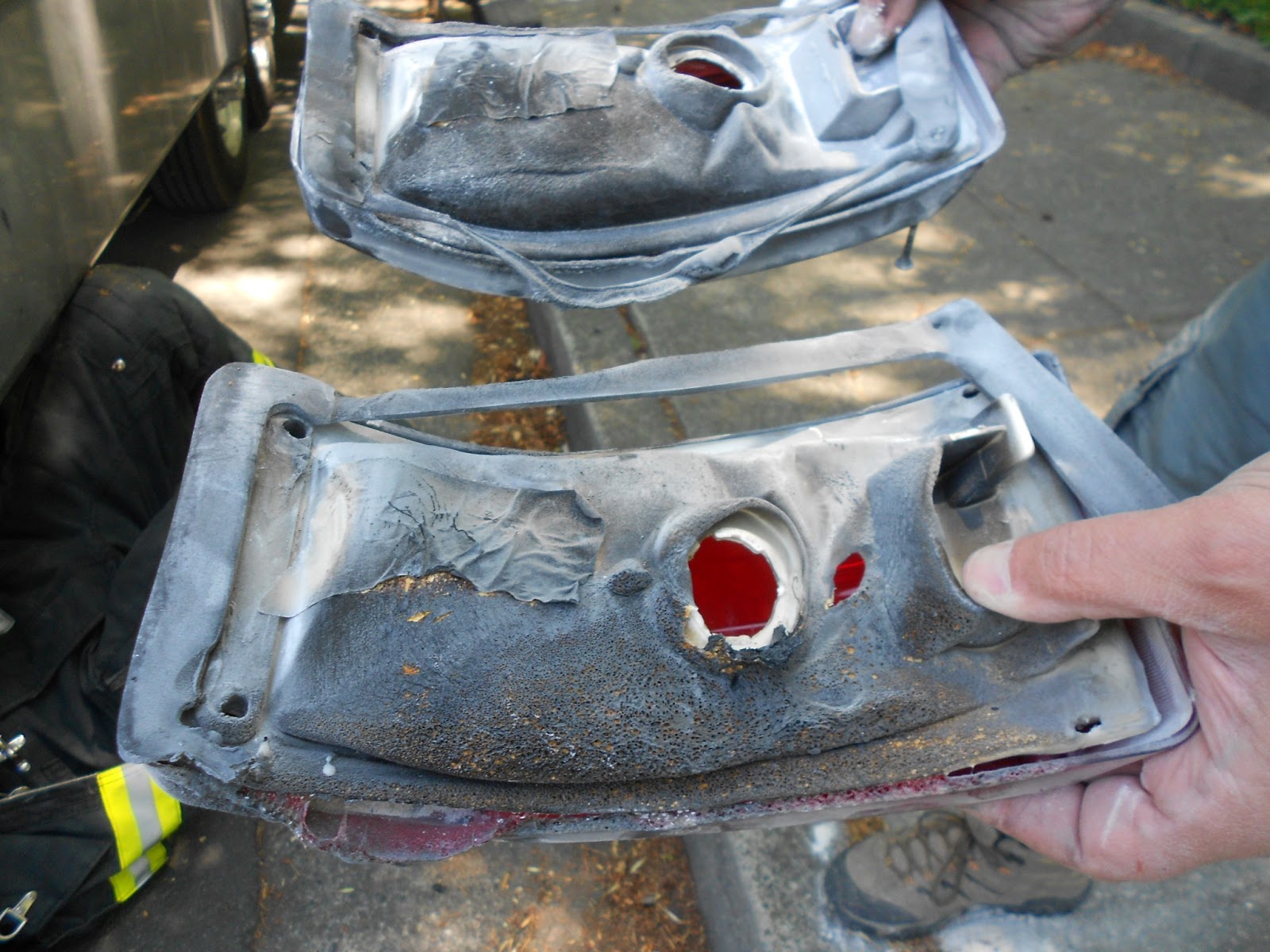 The fiberglass behind the lights had also started to burn. 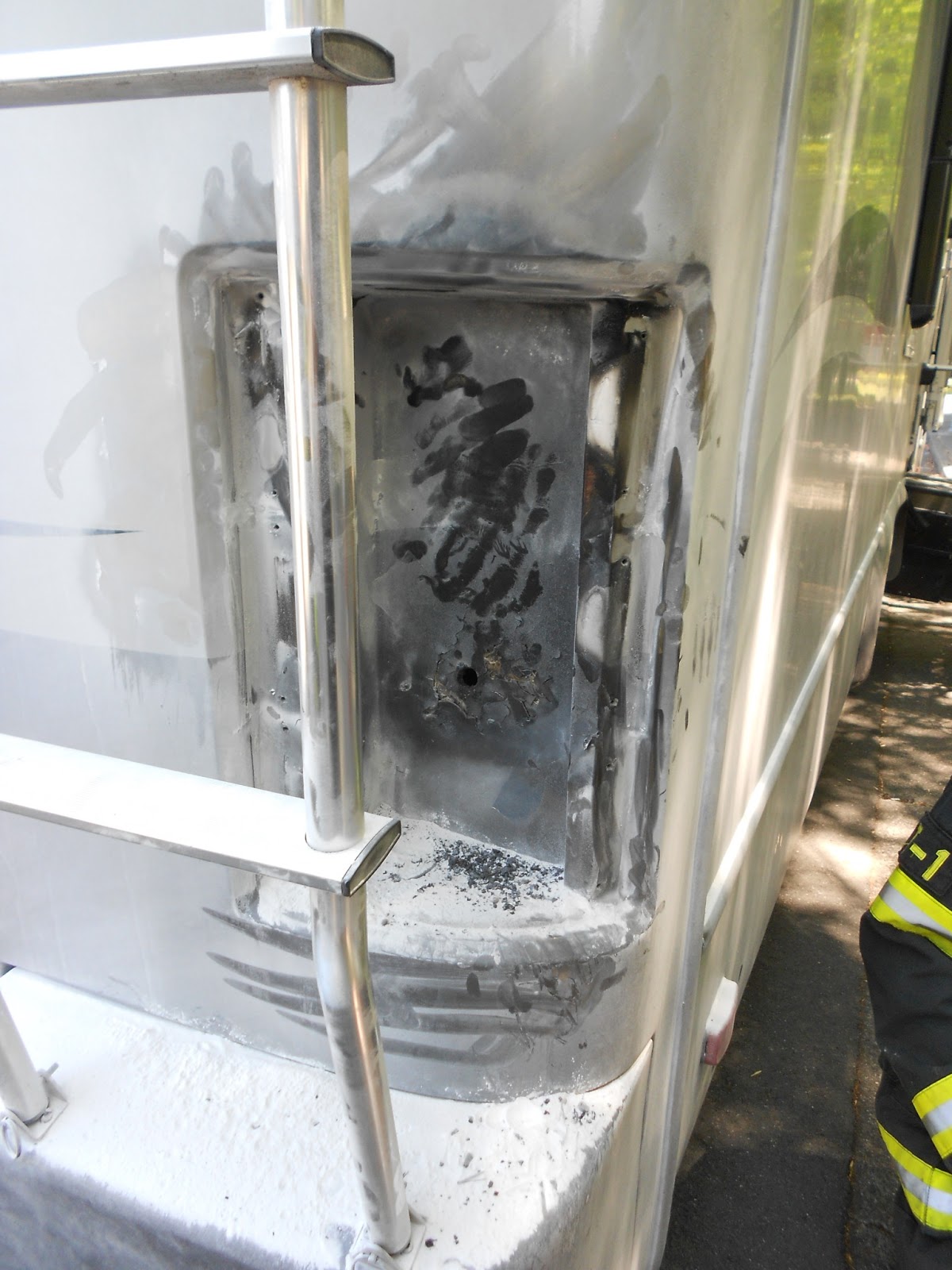 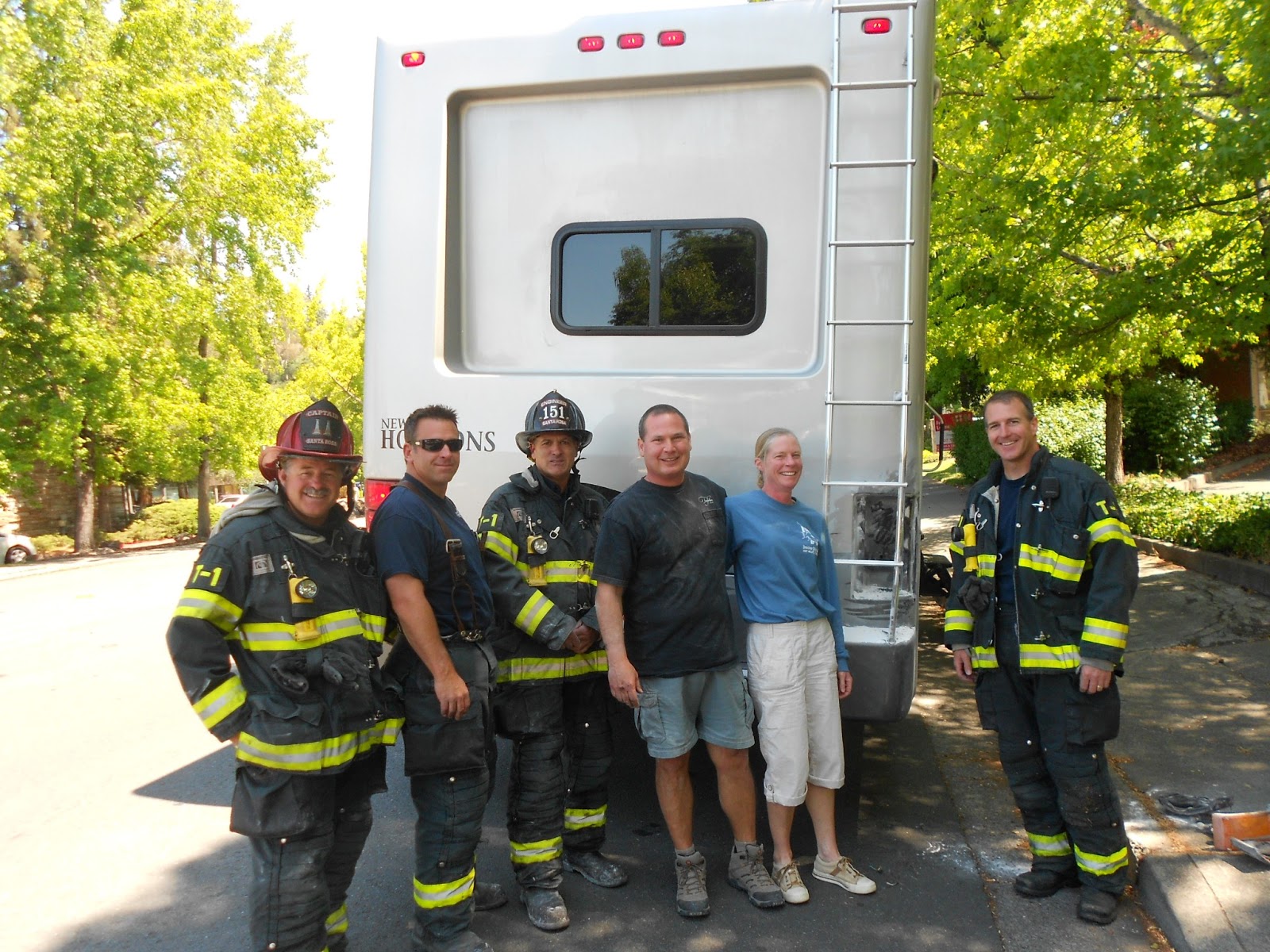 Here was the problem. We opened up the tail lights on the driver side to see what they looked like. The wires were run through a hole cut into the fiberglass. Over time, the wires rubbed on the edge of the hole until the plastic cover was worn off them, the wires were exposed, and a short was created. This was just sloppy manufacturing. The solution was simple. We added a plastic sheath around the wires to protect them from the edges of the hole. Then we added some silicone caulking around the hole to help hold the wires in place and soften those edges around the hole. We'll also be doing an annual inspection of these wires in the future. 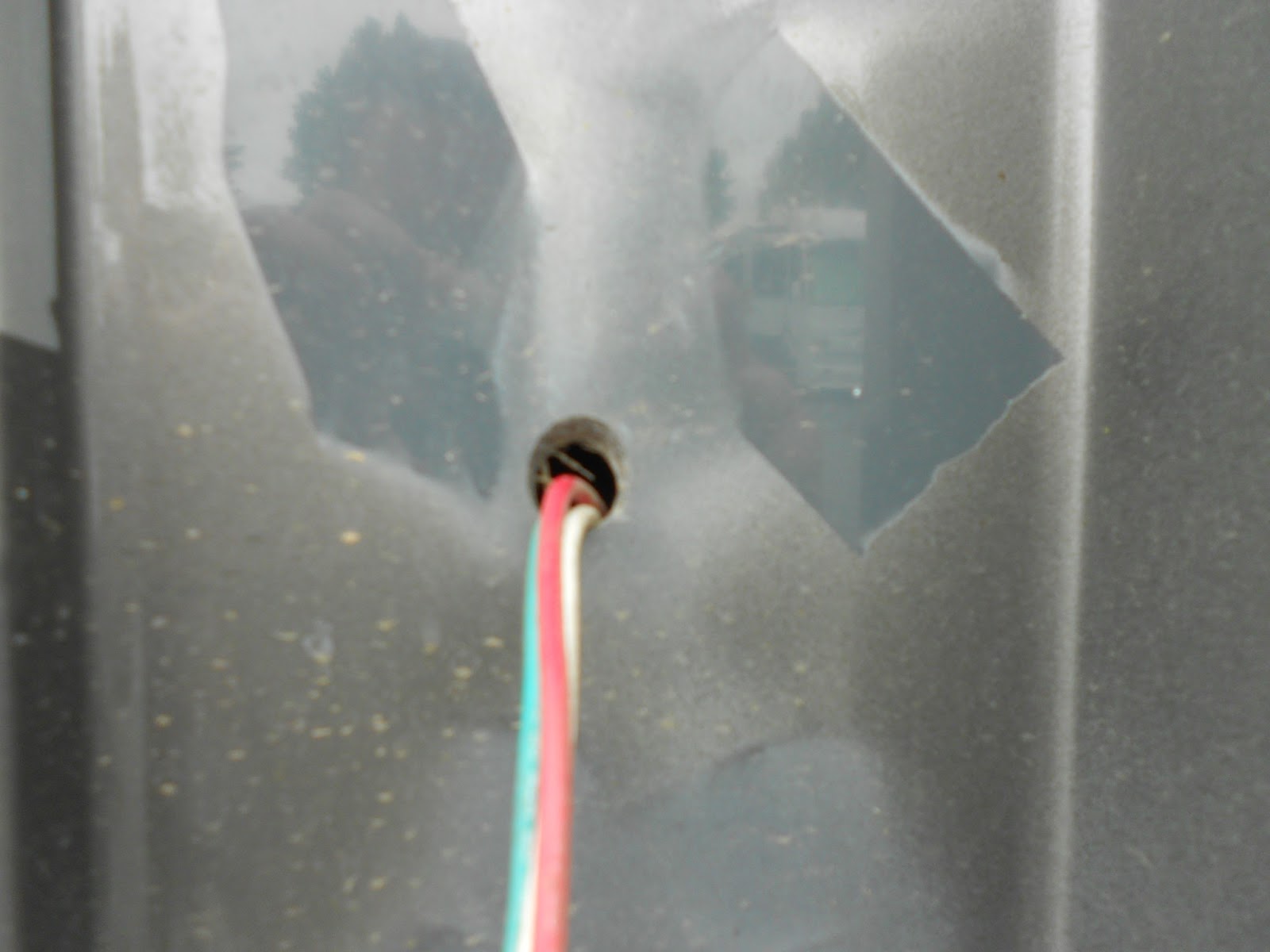 We cleaned up area as best we could and were able to buff out most of the outside discoloration from the flames. 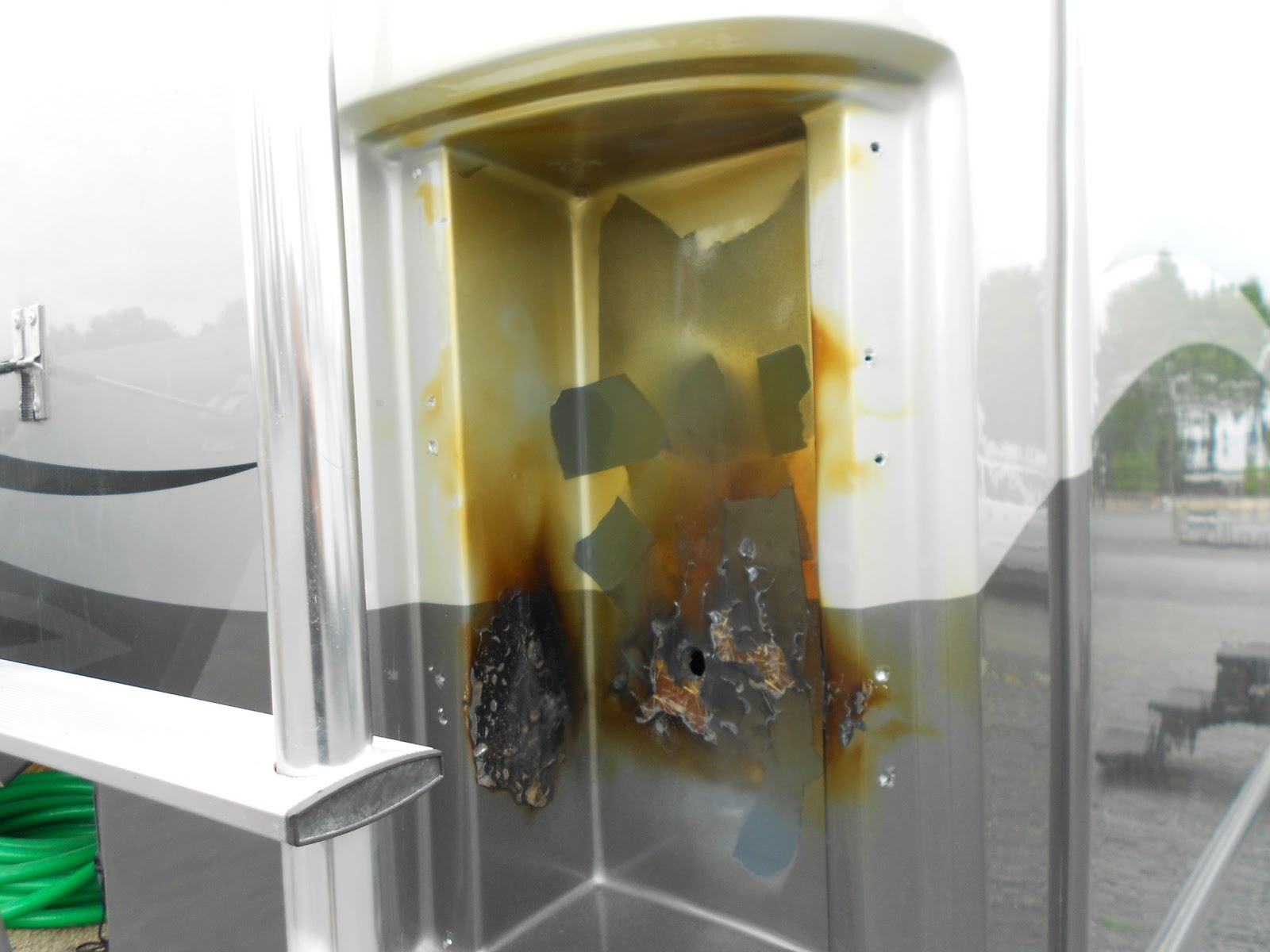 After the new tail light fixtures were installed, it looks almost as good as new. 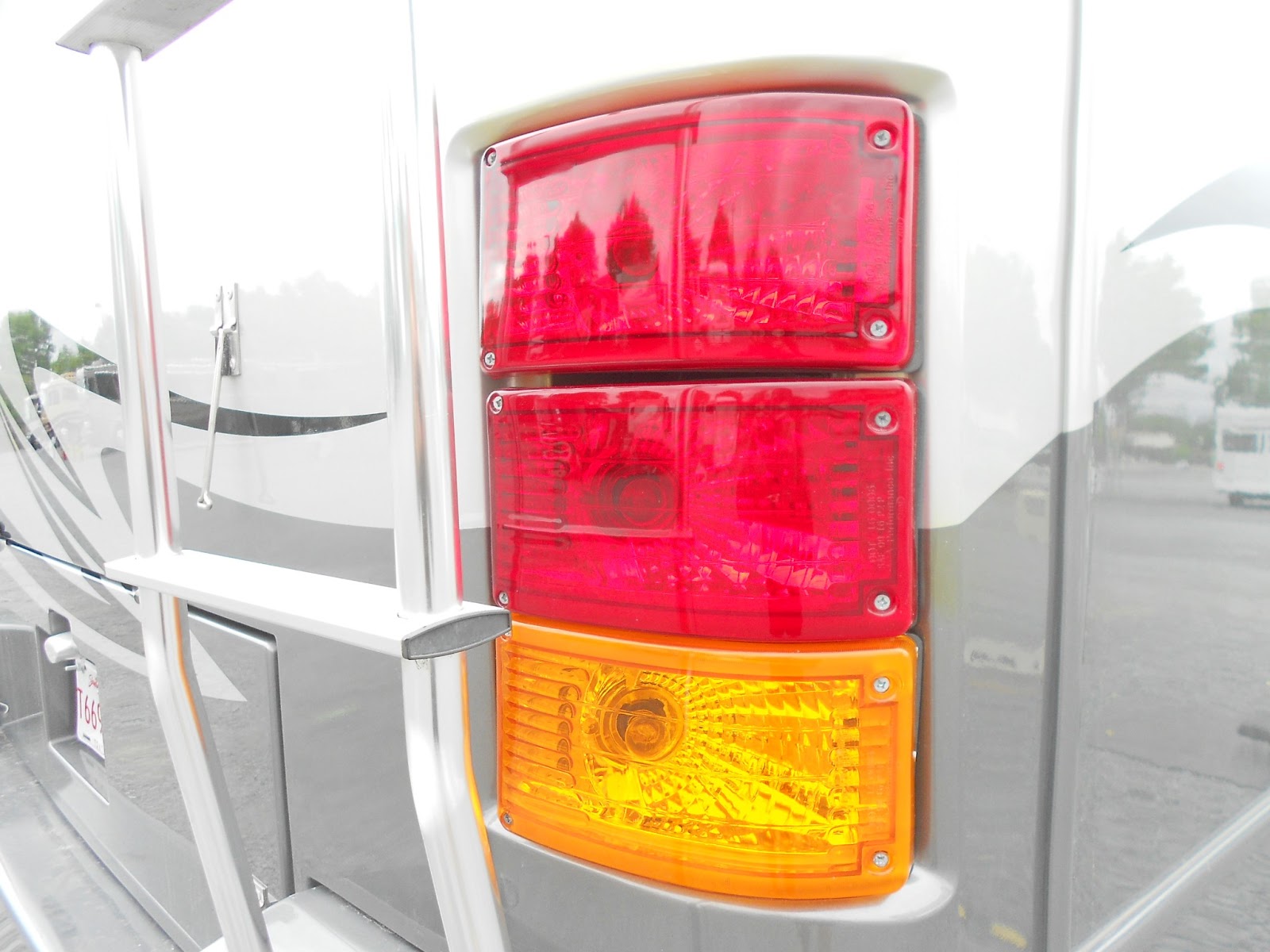 Thinking about this after the fact is actually the worst part. We spend a lot of time driving on back roads where we don't see other vehicles for miles. Just the week before we had been driving through central Nevada on Route 50 (aka "The Loneliest Highway"). If we had caught on fire there, a third of the rig would have been in flames before we would have seen the smoke behind us.

If that knock on the window had come 30 seconds later, the flames probably would have been too far out of control for us to stop them on our own. Even though the fire department responded so quickly, we could have lost most if not all of the rig, especially if the fire had reached a propane line. With a combination of a lot of luck and a little bit of skill we were able to avoid a major disaster.

This is just the most recent of four major manufacturing flaws we've encountered in our 15 months on the road. To their credit, New Horizons responded quickly to help us fix each problem, but it's a little disappointing to know you've paid top dollar for what is a best of class product and still experience so many manufacturing flaws.

These issues are easier to cope with once you come to terms with the fact that all RVs are pieces of crap, it's just that some of them smell a little better than others. Our rig is one of those with a tolerable smell. :-)