How to Survive a Bus Crash

Yesterday, while participating in an agricultural seminar in Yuma, AZ, we were involved in our first tour bus crash. We walked away from it just fine, but more than half of the riders (23 people) ended up in the hospital with three being airlifted from Yuma to a hospital in Phoenix. Four people were still in serious condition as of today.

The bus carrying us on our tour of the farms tried to make a left turn up onto a dike. I guess the driver was so concerned about the water on the right side of the dike that he cut the corner on the left too tight, losing his rear driver side wheels over the left edge and starting the the slow rollover of the bus down a ten foot embankment.

We were seated on the left side of the bus in the dead center. When he made that left turn, I had a great view of the slow motion wreck. First I told Susan there was no way we'd make the turn and we would get stuck. That was no big deal since there were about six large tractors working the fields around us. Any one of them could have pulled that bus out of the mud.

As the driver took the turn tighter and tighter I looked at Susan and told her "we are going over, brace yourself".  At first she thought I might be kidding...until she saw the look on the face and noticed me finding some good hand and footholds to ride the way down.

That was the most interesting part. The whole process took about five seconds. In terms of a crash, that might as well be a 100 years. As the bus began roll over, we had time to think about where we would end up (on the bottom side next to the dirt), how to brace for impact, where other passengers might fall on us, and the fact that we'd miss an excellent lunch that was scheduled for after the tour (not to mention that the vegetables that we picked to take home were rolling all over the place).

Since just about everyone on the bus was a snowbirder who regularly travels in an RV, I figured a lot of other people would have also noticed what was about to happen. Amazingly, the recognition of what was happening and the screaming didn't start until we were half way through the roll and people and bags started coming out of their spots as the right side of the bus was rising above us and those of us on the left started to roll down.

This was when something unusual happened. Somehow, all of the people and their miscellaneous bags came tumbling down from above us, but nothing landed on us. Not even a water bottle. All of the people and their stuff fell onto the people seated in front of and behind us. It was as if a force field of some kind made them all miss us as we braced ourselves to hit the ground at the base of the dike. Sometimes it's just better to be lucky than good.

When we hit the bottom, I bounced into the window I was sitting next to. The safety glass shattered but didn't break. Susan ended up standing on the sides of the seats right above me. Other than a couple of really minor cuts from the shattered glass, neither one of us was hurt. The people around us weren't so lucky.

As we looked around, there were people trapped under other people and pieces of wreckage with arms and legs sticking out in different directions. Sometimes it was hard to tell what pieces belonged to which people. Since we were in the center of the bus, I knew we would be the last to get out. It took about 25 minutes before we were able to get everyone out. Susan and I were the last ones off. We spent our time trying to make the people around us more comfortable and then helping to unwind them from each other and various pieces of the bus. There were a lot of broken wrists, ribs, ankles and other bones, but surprisingly very little blood. Again, probably thanks to a slow motion crash.

About 12 of us on the bus weren't hurt at all. Since we were fine, we had the "luxury" to feel sorry for the driver, the Visitor Center staff, and the farming family that was giving us the tour. Too many people on the bus that will be recovering from their injuries for a long time didn't have that same luxury.

On the bright side, we became better friends with two families that farm about 8,000 acres throughout the Yuma area. We'll be getting together with them again. We're also still planning to participate in two more Yuma agricultural tours next week. After all, what are the odds of being in more than one bus accident in five days?


It took us about 25 minutes to clear the bus. At 45 minutes, still no EMT on site. It pays to be able to be your own First Responder. 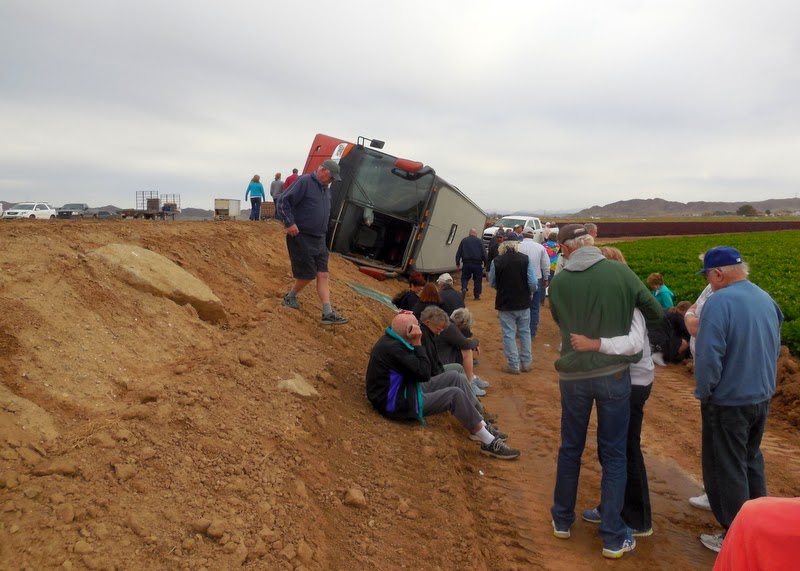 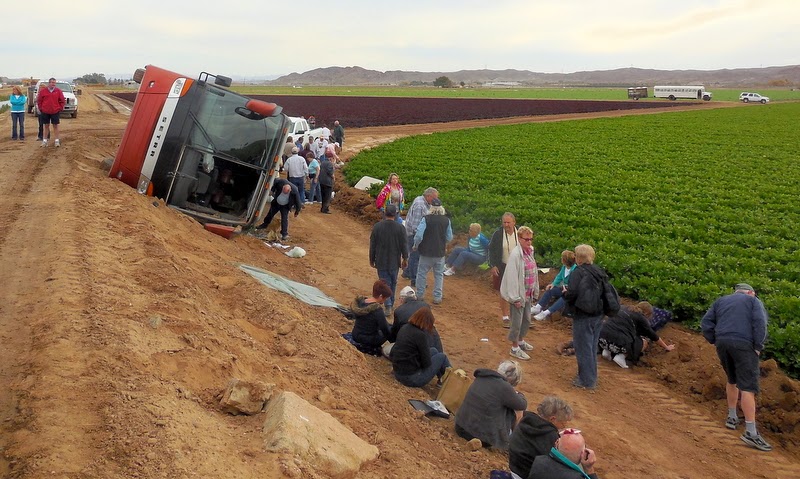 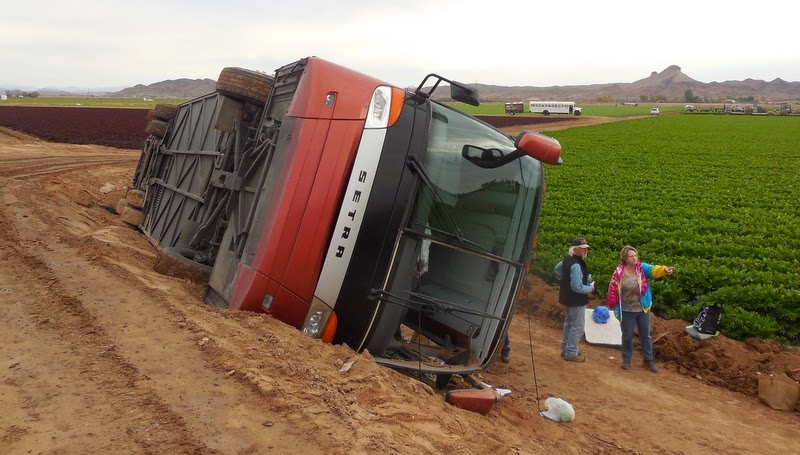 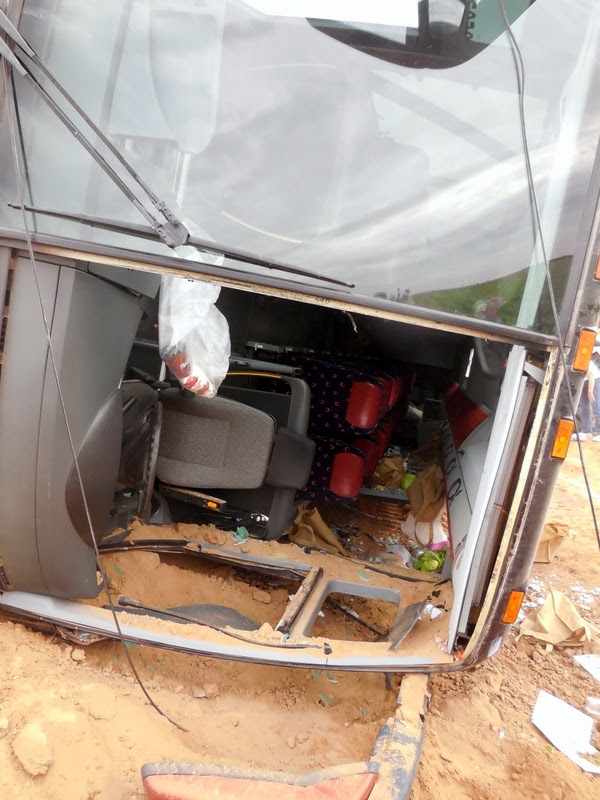 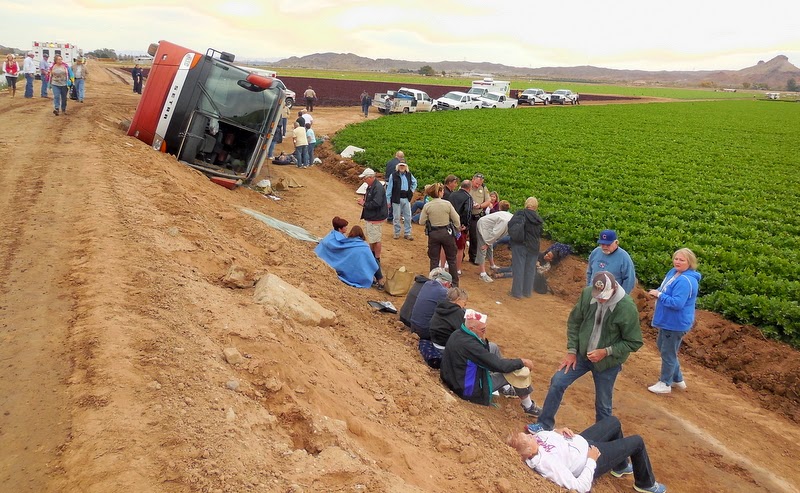 And a prettier view at the end of this day in Yuma, AZ. 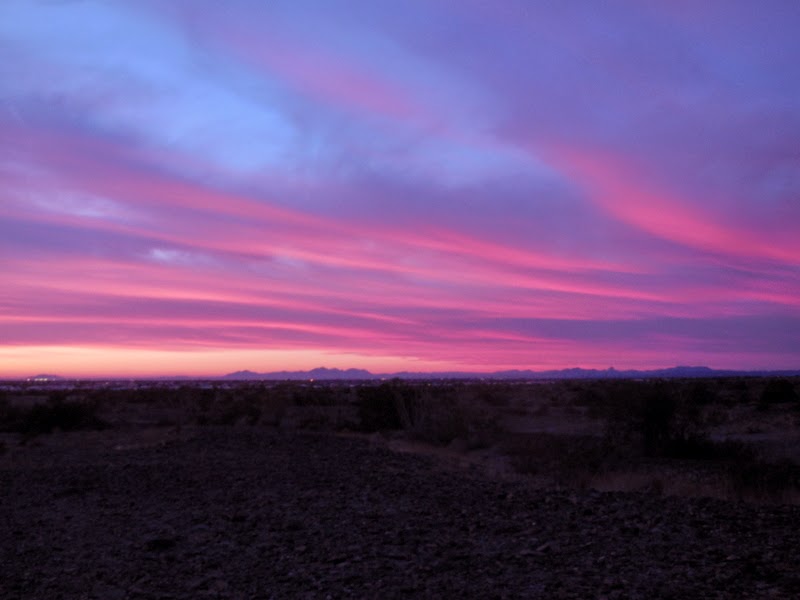