A River Runs Through It

In wandering around the country sometimes you just stumble upon a place that has that special "something" going for it. Usually it won't be a place that is written up in any travel or ratings guide. The River Clan Saloon is that kind of place.

Located in central Idaho near the town of Kooskia, this little riverside pub sits on one of the prettiest stretches of the Clearwater River you can find. The spot isn't just perfect for steelhead fishing, it's also perfect for the slip 'n slide set-up that takes you right into a sweet spot on the river. We didn't partake of it ourselves, but it does provide better entertainment while sipping a beer or a glass of wine than just about any other establishment we've visited in our travels. 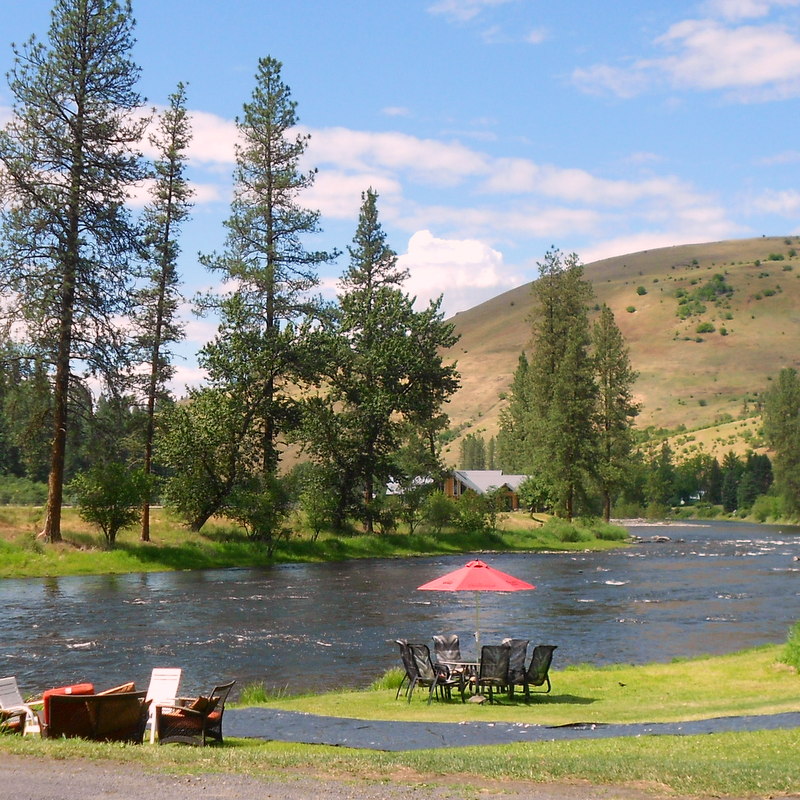 Like most places with soul, the pub is owned and run by the family that lives on the property. When you arrive, you're greeted by Larry, the family standard poodle, who knows how to relax and have a good time. We became fast friends. 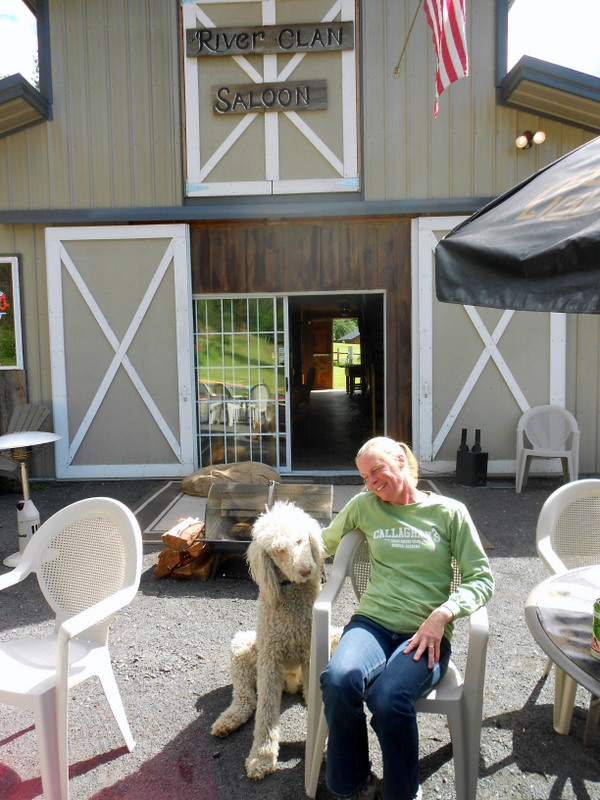 The pub was started and is run by son Anderson, a recent business school graduate. His business model/motto for the saloon declares:


"We've been to where you are going, and this is better"

We are inclined to agree. This was one of the best stops on our three month travels through Idaho. 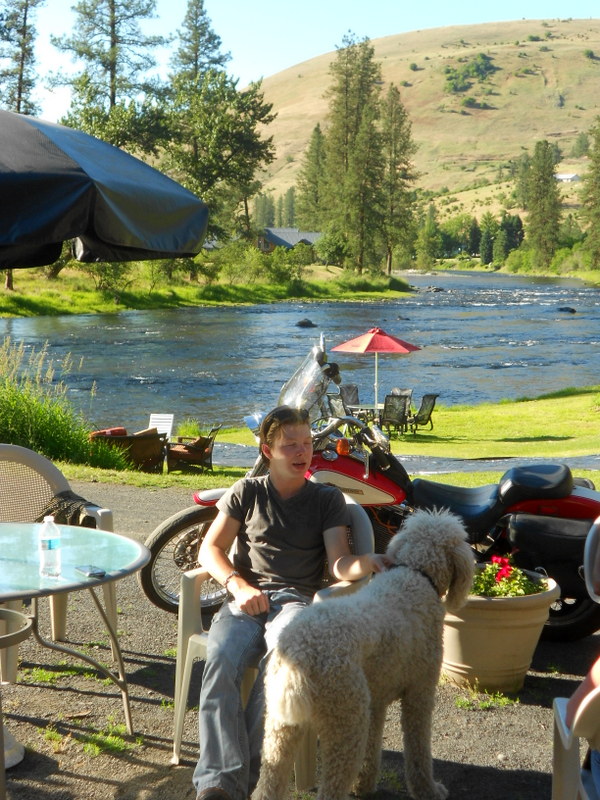 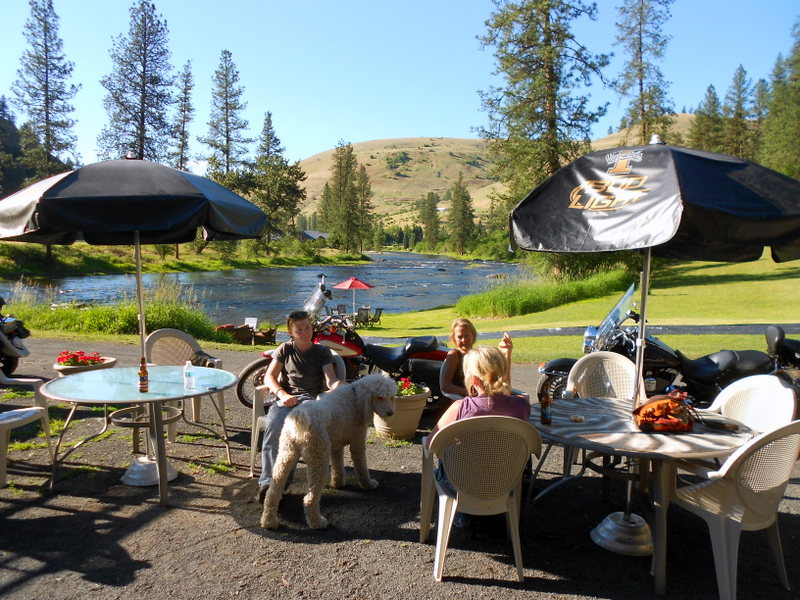 Like most family run establishments, the River Clan Saloon is a total family affair. Mom cooks the hamburgers to order (excellent, especially when enjoyed creekside) and dad rolled up with a group of his friends on their Harleys and was happy to provide all kinds of valuable information about the area for people like us who are looking for land in Idaho.

The family also has accommodations for the the fishermen who descend on this valley each year for the steelhead run. Their section of the river is the definition of perfect trout waters.

If you happen to be going through the heart of Idaho, take a ride along beautiful Highway 13 and look for the River Clan Saloon. They are between Grangeville and Kooskia down by the waterside (3341 Highway 13). It's the perfect place to linger for an afternoon (or two or three).
Posted by John V at 11:11 AM No comments:

It's time for a healthcare rant.

As two of those sad souls who don't have health insurance through through a government program, union affiliation, an employer, or one of the increasingly rare rare corporations that still offer healthcare coverage to retired employees, you would think that we would be delighted about the promises of Obamacare.

Unfortunately, Obamacare will not solve ours or this nation's healthcare problems and will just serve to perpetuate the pricing issues that are at the root of the problem.

For example, from Bloomberg News:
Shetty is not a public health official motivated by charity. He’s a heart surgeon turned businessman who has started a chain of 21 medical centers around India. By trimming costs with such measures as buying cheaper scrubs and spurning air-conditioning, he has cut the price of artery-clearing coronary bypass surgery to 95,000 rupees ($1,583), half of what it was 20 years ago, and wants to get the price down to $800 within a decade. The same procedure costs $106,385 at Ohio’s Cleveland Clinic, according to data from the U.S. Centers for Medicare & Medicaid Services.
“It shows that costs can be substantially contained,” said Srinath Reddy, president of the Geneva-based World Heart Federation, of Shetty’s approach. “It’s possible to deliver very high quality cardiac care at a relatively low cost.”

No, it shows that our existing model in the United States is a scam that is promulgated by the so-called "health care" companies, doctors, "insurance" companies, pharmaceutical companies, hospitals, and others all of whom conspire together to lobby for monopolistic pricing protections from our political leaders so they can steal everything that isn't nailed down and half of what is.

And it's not just heart surgery.  If you took the price of having a baby in 1963 and inflated it by the CPI you could walk into any hospital, have that child, and spend under $1,000 -- including three nights in the hospital.  Today you're lucky to get 12 hours and the price is 10x as high as it should be.

From the same Bloomberg News article:
“The current price of everything that you see in health care is predominantly opportunistic pricing and the outcome of inefficiency,” Shetty, 60, said in an interview in his office in Bangalore, where he started his chain of hospitals, with the opening of his flagship center, Narayana Hrudayalaya Health City, in 2001.

"Opportunistic pricing" is just a nice way of saying legalized extortion. That can only exist one way....when firms, individuals and everyone involved in doing it has to go to the government and get laws passed to protect them from competition, otherwise someone will come in just like Shetty and completely destroy their existing healthcare model by undercutting the price by 90% or more.

There is no crisis of health care and its cost in the United States or anywhere else.  There is a manufactured system of theft that is maintained only through legalized extortion by everyone involved in it, and absent their special protections that they have lobbied for, all of it and everyone involved in it would be able to be prosecuted under existing laws -- specifically, the Sherman and Clayton Antitrust Acts.

We have spent much of the last two years searching for healthcare alternatives that are reasonably and transparently priced, do not involve insurance, and enable us as individuals to take personal responsibility for our healthcare choices.

The dental profession tends to be among the best for open and competitive pricing. Perhaps the best example is in the laser eye surgery field where a lack of insurance coverage led to both improvements in service and lower prices as firms had to compete for patients. In lab testing (PrivateMD Labs) and even medical scanning (MRIs, etc.Wecaremedicalmall), it is becoming possible to search for providers on the Internet that offer these services at 1/10th of the prices usually charged through insurance companies (and often cheaper than if you went through your insurance company and paid your share of the coinsurance for the procedures). Another example is the Oklahoma Surgical Center, a group of doctors who do not take insurance and charge dramatically lower prices for common surgical procedures. However, these free market examples are few and far between, the existing laws and anti-trust protections making it difficult for the individual to find affordable healthcare options like these.

The simple fact of the matter is that roughly one quarter of all economic activity in this nation is tied to this monopolistic pricing scam, directly and/or indirectly. One quarter of every dollar earned (or more usually borrowed) and spent, and of that, ninety percent or more, is simply stolen through these pricing machinations. This scam is larger than any other, and yet there is not one political party or organization that has taken this up as their headline issue.

The reason is simple:
They are all in on it and profiting from it, even the so-called Libertarians whose political beliefs in general I tend to lean towards.

We can start with the political claim that Medicare is "necessary" for older people to get reasonable medical services when the proof is right here that you can have your heart fixed for under $2,000 and in fact you could fly to India and back plus have the procedure done for less than $5,000.

Any person, institution, corporation or lawmaker who supports, advocates for or otherwise keeps in place the "special protections" that are the only reason healthcare pricing exists at more than 70 times the market level (including travel costs) and claims that this model is sustainable in this country on a long term basis is simply lying to us. The worst part is that so many of us want to desperately believe the lie and won't demand the real solutions.

And before anyone out there starts claiming that we pay more in this country because our healthcare services are so far superior to the rest of the world, do your research first. That may have been true 30 or 40 years ago, but not now.
And for those of you who believe that our rule of law and malpractice laws makes our healthcare system more consumer friendly than the rest of the world and therefore presumable worth more money. Just ask yourself, "If something goes wrong with my surgery, is it worth paying 70 times more for that surgery in the US just so my family can have an easier time suing someone?"

And finally, those of you out there who believe you are immune from this issue because your government, union, employer or former employer provided health plan will take care of you....well you are fooling yourself, have your head in the sand, etc. The healthcare pricing structure in this country is becoming increasingly unsustainable. Obamacare, and nothing proposed thus far by the Republicans, will solve our problem.