The One Thing RV Boondockers Should Fear

Most people seem to have a romantic vision of their "RV Dream" that includes them parked all alone with the perfect scenic vista of their choice, a drink in one hand, their soul mate's hand in their other hand, and a gorgeous sunset that even Hallmark would envy. Basically, a really nice Cialis commercial.

Once they hit the road, reality sets in. Boondocking involves a lot of unknown variables that makes it just plain inconvenient for most people. So the Cialis commercial morphs into full hook-ups at the closest RV campground with endless potluck dinners and thousands of questions like " How do ya like yer rig?", "Where ya from?", and "How do ya like that new Ford engine?"

Worse than the inconveniences, many people have fears that prevent them from ever really getting away from it all and finding that ideal boondocking spot. There are numerous reasons and not enough space in this post to explain why we have no fear of such things as thieves, rapists, murderers, teenagers, wild animals, poisonous creepy crawlers, loneliness, health issues, cannibals, loss of a Verizon signal, etc.

The only thing that can keep us up at night is.....water.

I'm not talking about the gentle rains that activate the oils on the leaves of creosote bushes and fills the desert with a fragrant, intoxicating aroma. It's the hard downpours that can happen throughout the year in the desert southwest that are the most concerning when it comes to picking a boondocking spot.

We recently found a nice private spot in a desert meadow not far from Organ Pipe Cactus National Monument. We were all alone with great solar exposure, four bars of Verizon, and a nice grassy base rather than the usual sand and rock. 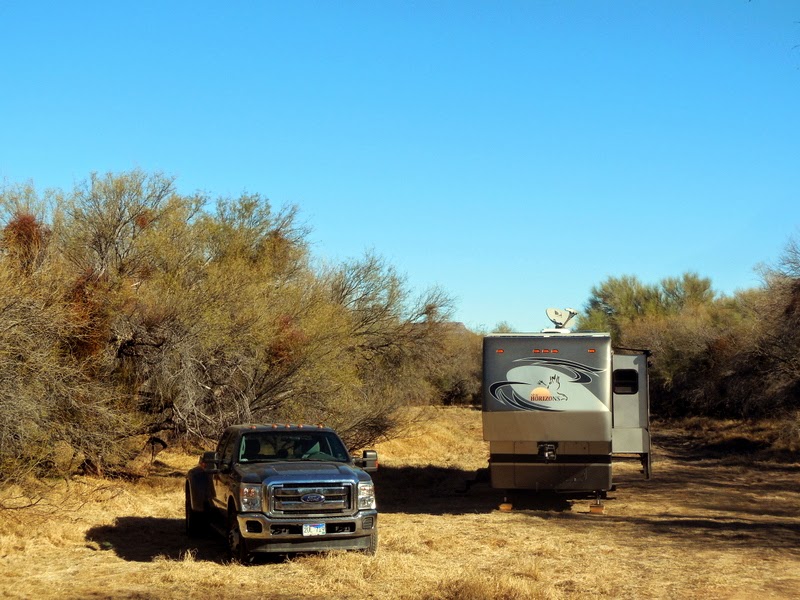 The ground was firm and dry, even though there had been a little bit of rain the week before. When in the desert, I always like to do a thorough walk around of a site to see if I can find any evidence of previous water flow (trying to put that old college hydrology elective to good use). In this case, there was one site that looked like it could dump some water into this meadow during the monsoon season.

After three days in this spot, the weather forecast changed and called for a decent rain event. We decided to hook up and move about a mile away to a typical desert sandy spot.

The rain event turned out to be overblown. Our new sandy site became a little mushy. The big disappointment was when we returned to our old meadow site and found it high and dry. We decided to stay in our new site for a variety of reasons.

A few days later the weather forecast turned again and warned of heavy rains on the Friday and Saturday before the Super Bowl. Our reaction was "yeah sure, we'll see". It started raining early on Thursday afternoon. Nothing hard, but nice and steady. By Friday afternoon, the water outside had started to flow. Where there had been no evidence of previous water flow in our new campsite, a small river formed under the rear of the rig. Pretty soon, our outside mat had floated away. 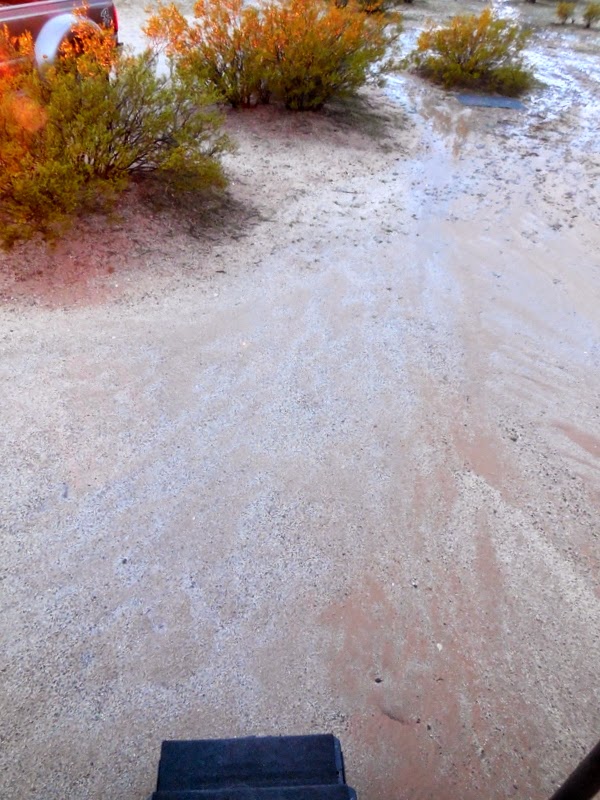 Then the real rain started just as the sun started going down. It was a real rip snorter. Before long, 3/4 of our campsite was a small river as the water flowed over the tops of the access roads on either side of our campsite and came right underneath us. 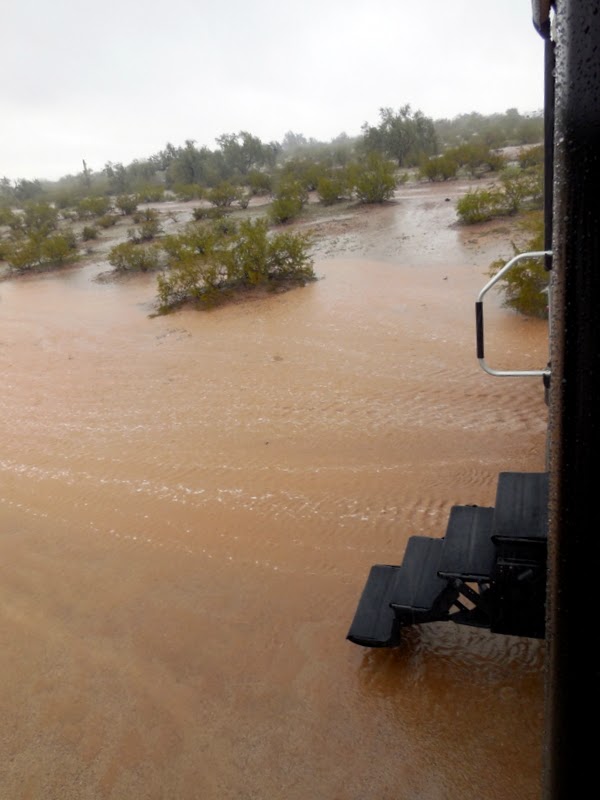 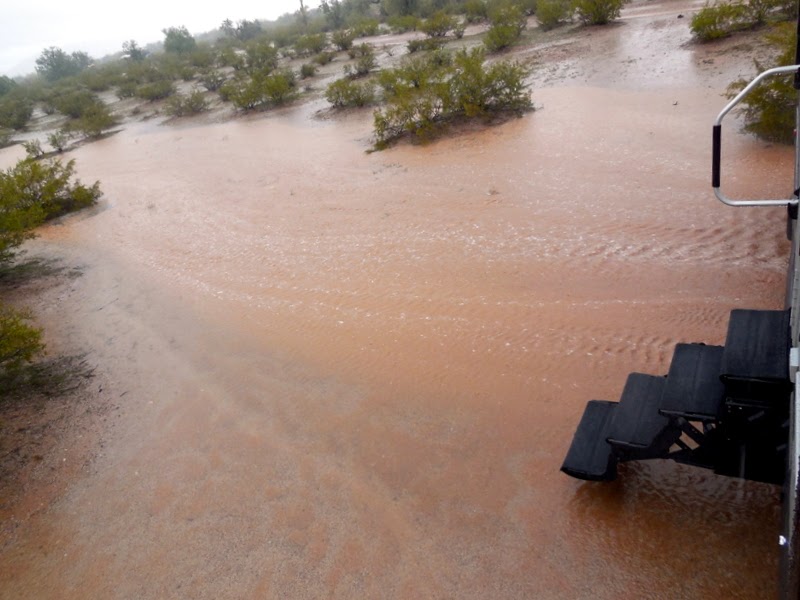 The hard rain went on for about an hour and a half before slowing to a lighter rain the rest of the night. By Saturday daylight, it was just overcast with intermittent light showers. The small river had been enough to undermine our foundations. The rig had settled a bit and we needed to re- level. Another hour or so of hard rain and we probably would have been in a much deeper hole. 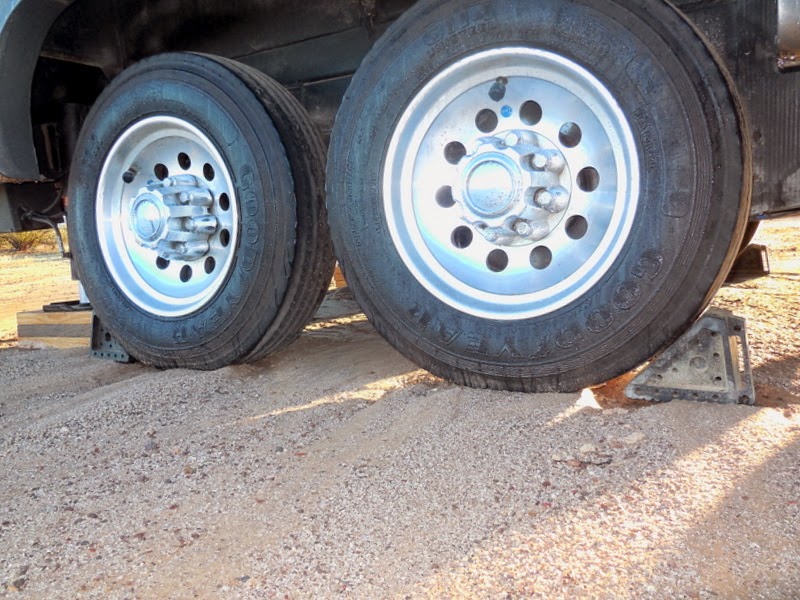 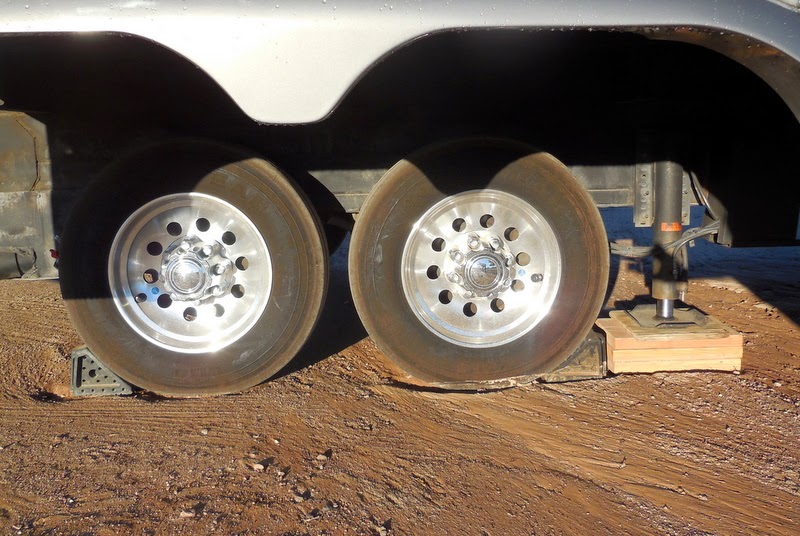 And where there had been no evidence of previous water flow, there was now obvious evidence of the flow through half of the campsite. In retrospect, the sand in this area was a little softer than the hard pack sand in the rest of the site. That softer sand was our hydrological evidence. 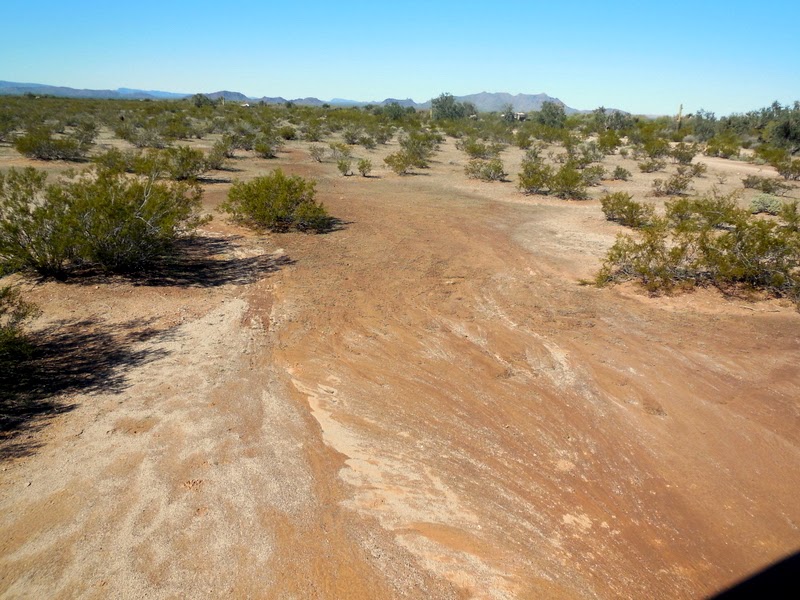 Meanwhile, back at our old meadow campsite, the scene was much uglier. Here's a picture of our old site when it was still dry after the rainfall earlier in the week. 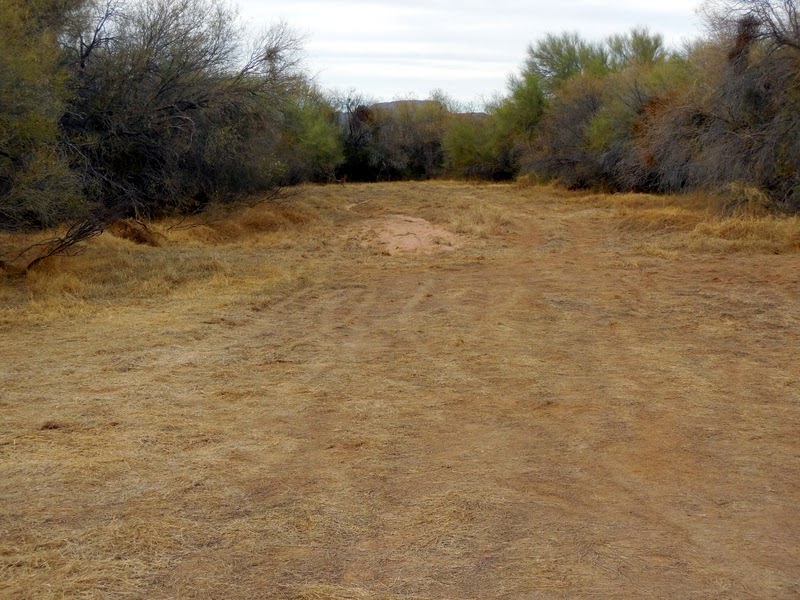 This is what it looked like on Saturday afternoon after the heavy rains. This picture was taken from the access road about five feet above the meadow. Based on the debris left from receding water, this new lake peaked at least two feet higher than the level in this picture. We had been camped next to that tree sticking out into the middle of the lake on the left. If we had stayed, we would have had some seriously wet feet. 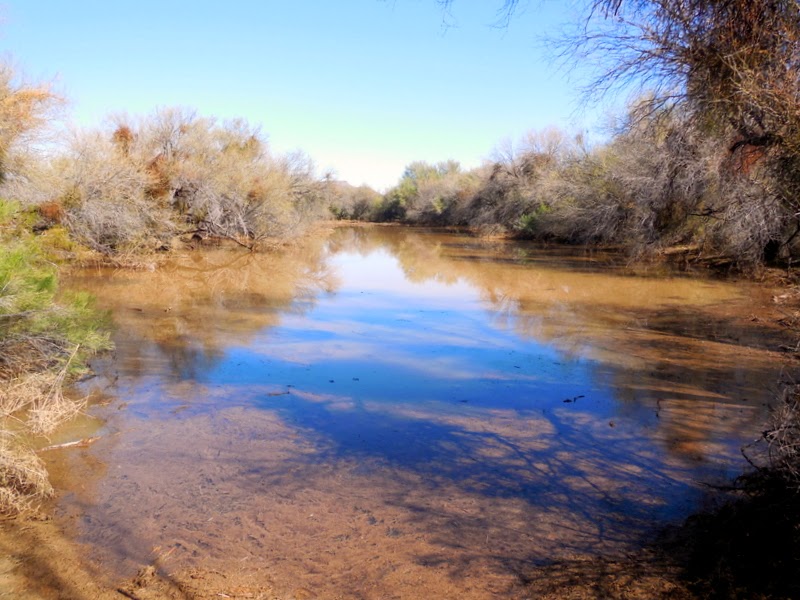 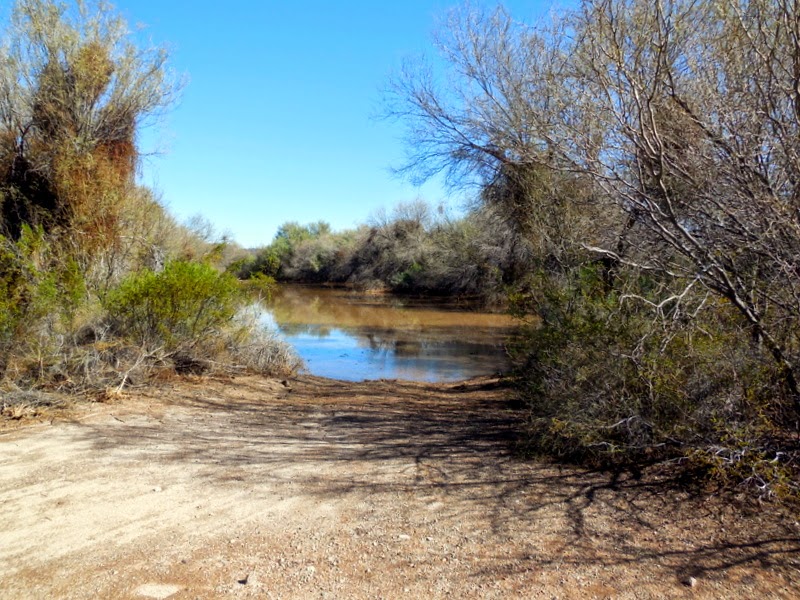 Even the two access roads to the site were turned into bogs. The water had washed sand into a very large cattle guard, almost filling it in. 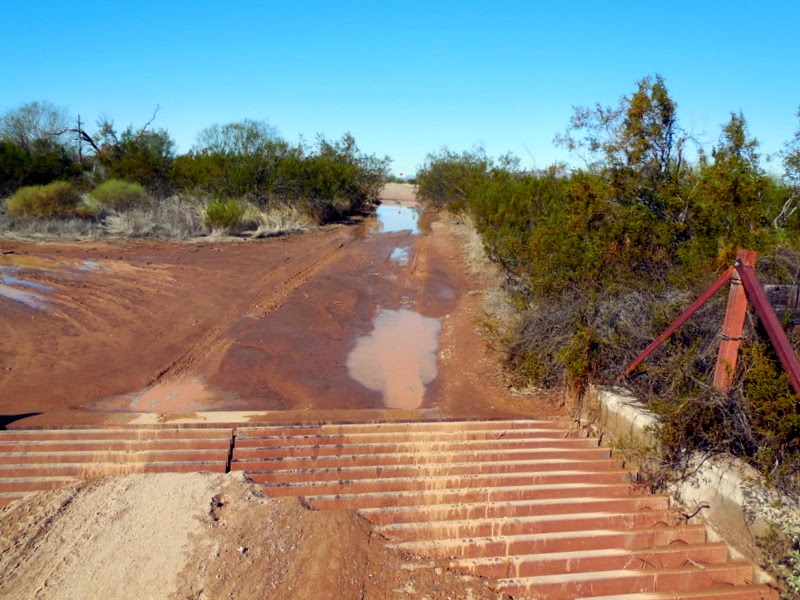 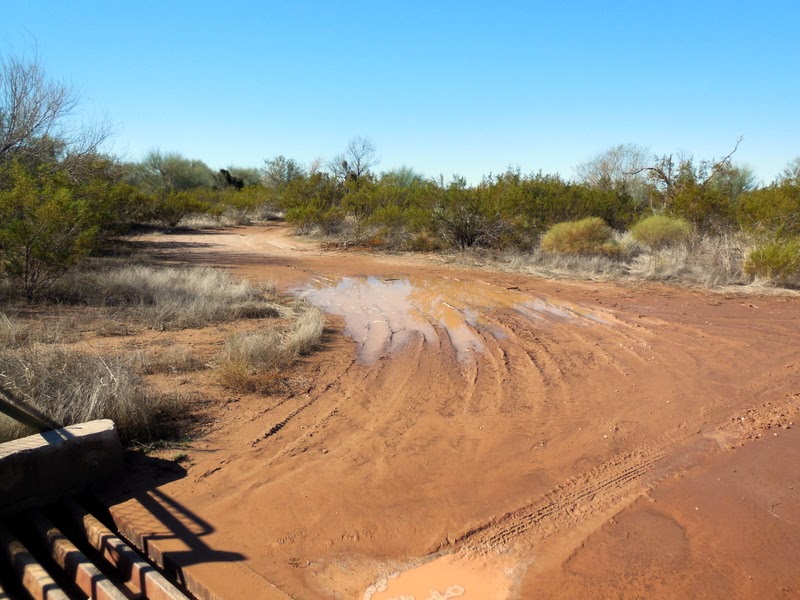 On one side, a two foot wide sink hole had formed. 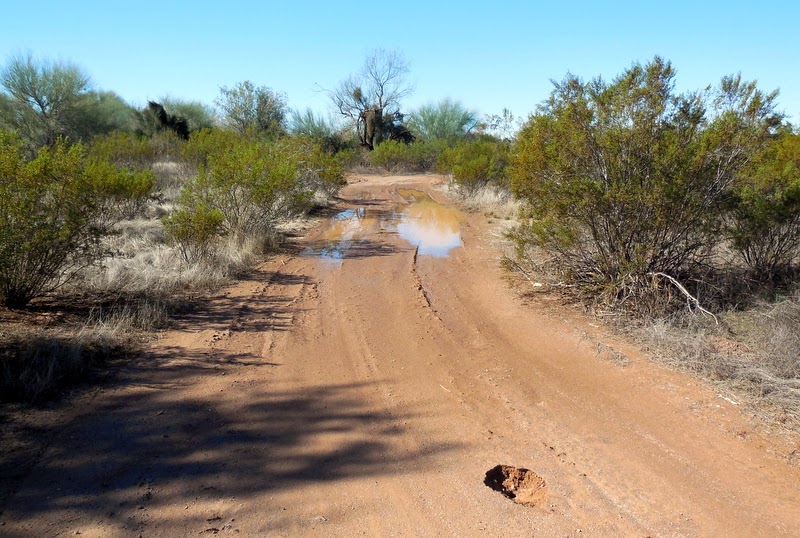 We returned to the scene eight days later. While the waters had receded a bit, it was still almost two feet deep where we had been camped. Between this and the access road mud bogs, we might have been stuck in this spot until March. 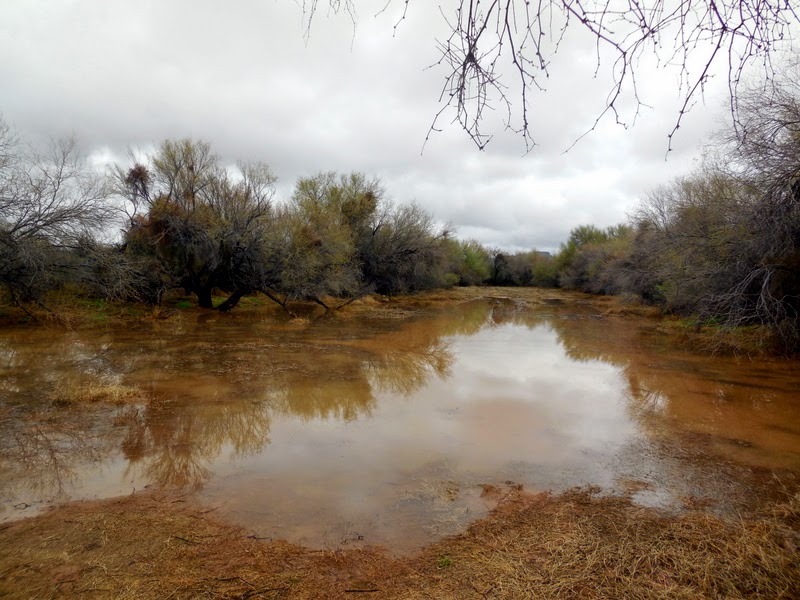 So water: boondocking friend and foe. There's some food for thought the next time you're camping out in a beautiful remote spot and the cannibals come knocking.
Posted by John V at 9:12 AM