How Awesome is This?

So far we have been able to find uncrowded off the grid places to camp for free that offer loads of hiking and even some fishing. All we need to do is provide our own water, food, electricity, and waste removal! Whether we are able to find these places after Memorial Day Weekend kicks off the travel season will be the big question.

Since we previously haven't been to any of the places we camp, it's always a little exciting and scary wondering what we'll find. When we rolled into the Soldier Creek Wilderness Area and the Nebraska National Forest in the far NW corner of Nebraska, our expectations were definitely exceeded.

We were all alone at the top of a bluff overlooking a pretty little valley with three creeks. 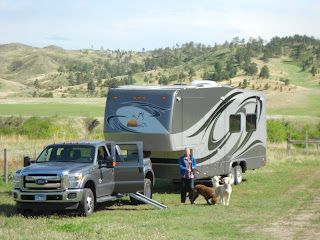 We did get some company when a couple showed up to do some exploring in the wilderness area with their four mules. 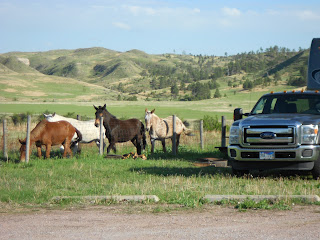 We had a dozen options for 10-12 mile hikes every day. You could hike all day and not see any signs of development. Not even a plane in the sky. 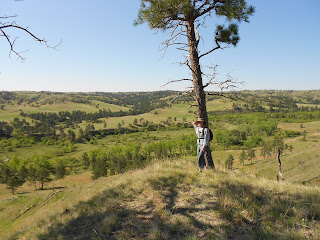 This area was very active in the last major war between the US and the Plains Indians in the 1870s. We were about 7 miles up a dirt road away from Fort Robinson. George Armstrong Custer spent some time here before heading north to meet his fate. Soldiers from Fort Robinson were also responsible for the massacre at Wounded Knee and the capture/death of Crazy Horse. There were a few old military wagon roads through the wilderness area. 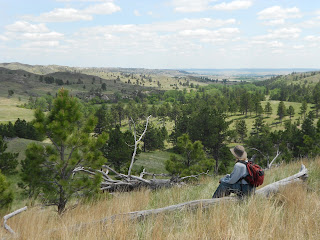 We weren't next to the water, but 50 yards away from our rig was this little gem of a creek. 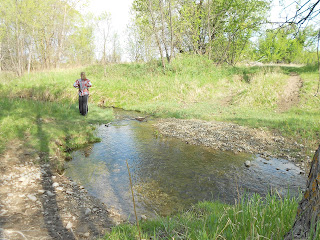 Hiking in all directions you could find little pools teeming with small, wily native brook trout, brown trout and some rainbows. 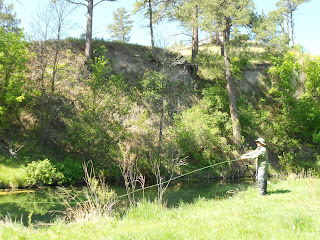 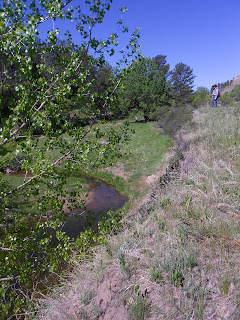 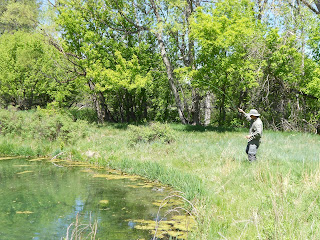 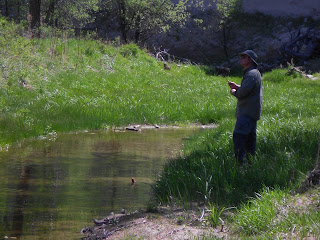 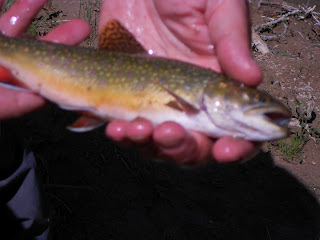 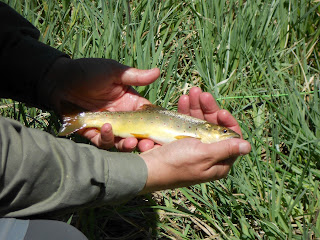 We explored the strangely eroded Legend Cliffs which bordered the east side of our valley. We hiked all day for seven days and didn't see any other people. 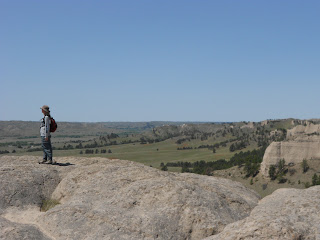 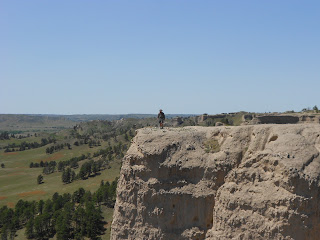 There were a few little ledges to get out on and sit for a while. This one almost looked like it was made for walking the plank. 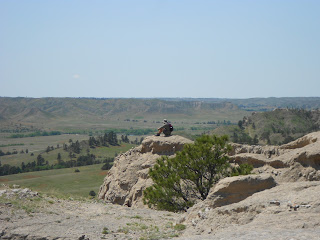 Susan didn't feel like checking out the view from the tip (she's the smart one). 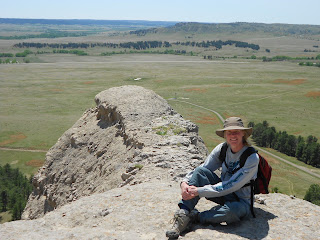 The best part was happy hour and the sunset at the end of each day. 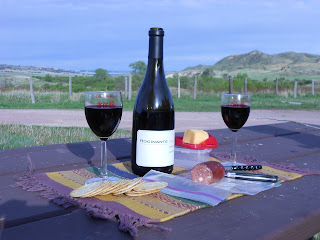 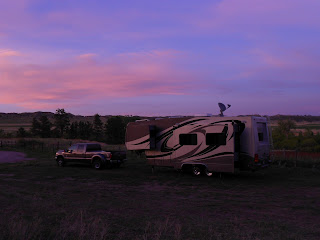 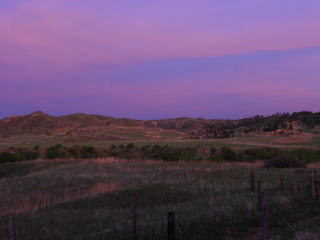 Nebraska is a fossil hunter's paradise. One of the finest fossil sites in Nebraska and all of North America is the Ashfall fossil beds in the uncrowded northern part of the state Ashfall Fossil Beds.

There is a hot spot in the earth's crust that the North American Plate slowly slides over as it moves from the northeast to the southwest. This hot spot currently sits near Yellowstone Park. Every 2-3 million years this hot spot explodes in a spectacular fashion. The next eruption is due relatively soon (within the next 100,000 years or so). About 12 million years ago the hot spot erupted in an area that is now Southwest Idaho. The debris cloud drifted east and left a distinctive layer of white powdered-glass ash that can be identified in Idaho, Wyoming, South Dakota, and Nebraska.

Most of the animals living in the savanna-like grasslands at the time survived the initial ashfall, but as they grazed across the ash covered plains, their lungs began to fill up with the abrasive powder and they began to die.

What makes Ashfall so unique (and heartbreaking) is that it is the largest collection of nearly fully intact animals. They are preserved in their death positions in a mass grave at an ancient watering hole, complete with evidence of their last meals, unborn animals, and with their last steps recorded in the stone. While this may have also occurred in other parts of Nebraska and other states, the glacial action to the east of Ashfall eliminated those fossil remains, while the erosion of the Rocky Mountains by the Platte River and other watersheds took care of any remains to the West. Ashfall is just in the sweet spot in between.

Even after 10 million years, there is only a thin layer about 8 feet deep that was deposited above the fossil layer. Amazingly, this fossil field, yielding more than 400 nearly complete skeletons, wasn't discovered until the 1970's. 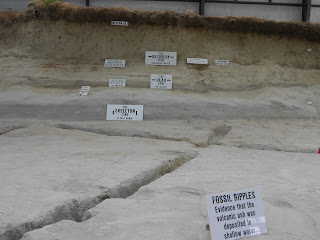 Rhinos used to roam North America. These are the remains of a pregnant rhino. 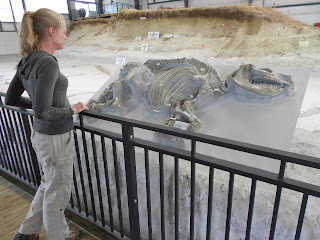 A mass grave at a watering hole. These animals, mostly rhinos, died together, adults next to juveniles. 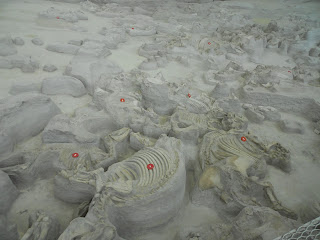 There were originally five different species of horses native to North America all of which went extinct. Here is a three-toed horse. 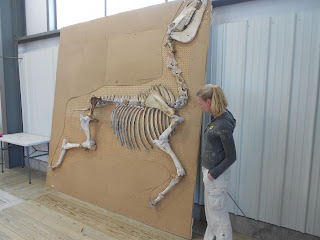 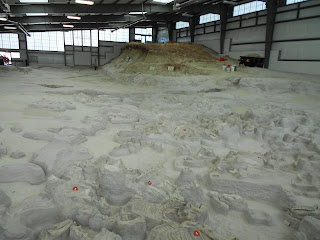 They figure that the site will be completely excavated within 25-30 more years. There are excellent unpaid internship positions available if anyone is interested in the work.
Posted by John V at 2:25 PM 2 comments:

Tails from the Back Seat: Zen & The Art of Priority Seating

Susan and John finally figured out there was a seating priority for their passengers, Karly & Jake, that guaranteed calm and tranquility in the back seat for long stretches of travel.

Karly's pole position was behind the front passenger seat where with a slit of her  eyes, barely lifting her head, she could keep track of every move of the driver.  This seat was also warmed by the early morning sun, acting as a sauna to comfort the creaky bones of the elder Karly and allowing her ample room to stretch out as Jake curled up in a shaded corner behind the driver.

Not to mind, in this position, Jake was rewarded with his favorite indulgences.  With just a tap of his nose under the driver's elbow or a snuggle of his chin on the driver's shoulder, neck rubs and head massages were bound to be forthcoming.

For hours on end, Jake also enjoyed attentively looking out the window, regardless if open or closed, to keep track of all that passed by.  If there really is an "Art of Racing in the Rain", Jake is perfecting it. 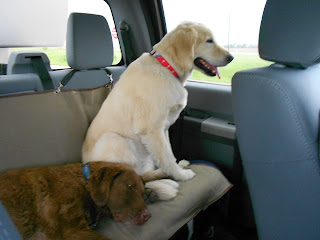 
As a rural state with a small population, Iowa seems to punch above its weight class on many levels. Every four years it becomes the center of the political world and every year it seems to be the location for some interesting movie (usually about a sports underdog). It's also the kind of place where complete strangers will wave to you while they drive by the small town diner where you're enjoying breakfast. As we headed north into Iowa to visit friends, it was the Dutch and German "cuisine" that sparked our interest. Iowa is best known for its corn, but its what that juicy corn does for the cattle, deer, pigs, and other wild game that is really special. Add to that the skill with which the Dutch and German artisans manage to butcher, season, smoke and cure these meats, and Iowa becomes a carnivore's dream come true.

Our first stop was the historic town of Pella. Founded by Dutch settlers in the 1840's, Pella now prides itself on that Dutch heritage including its annual Tulip Festival, the Pella Bologna unique to their meat shops, and what seems to be the largest selection of wooden shoes available this side of the Netherlands. They also have the largest working windmill in The US still used to grind flour (Iowa also leads the nation in the wind-powered generation of electricity). 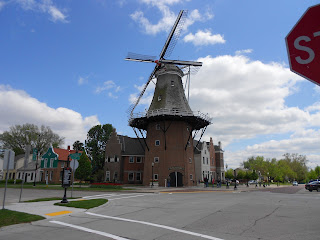 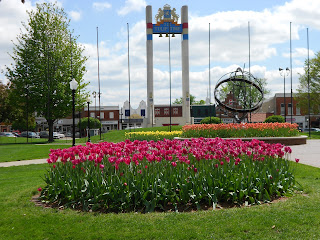 We decided to splurge and stay at a state park that actually provided electricity. We were right on the Des Moines river near the site of Red Rock Lake, the largest lake in Iowa. 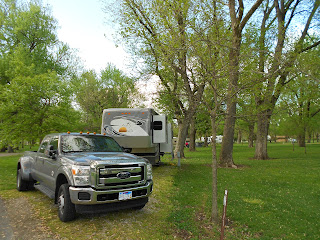 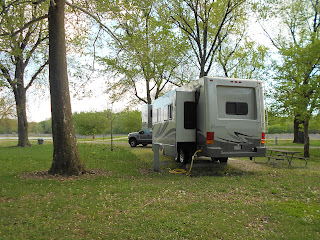 Following our stay at Red Rock Lake, we spent eight days in Cedar Rapids with our friends Denny and Cheryl. Denny and Cheryl did their best to make sure we visited every micro brewery, winery, meat locker and interesting restaurant in the region. With their wine cellar holding one of the largest selection of Rocinante wines in the US, they also hosted two wine tastings at their house which saw some of the largest per capita consumption of Rocinante wines ever recorded.

The Millstream Brewery at the Amana Colonies just south of Cedar Rapids (http://www.millstreambrewing.com/) has one of the best lineups of beers we've tasted anywhere. They are probably hard to find outside of Iowa, but are worth the effort to locate.

The Cedar Ridge Winery and Distillery (http://www.crwine.com/)  was also a treat. While Iowa's climate makes red wine production difficult, some of the hybrid white grape varietals do really well. The LaCrescent is as aromatic and brightly textured as any Riesling from CA and OR. It's has just enough residual sugar to taste great with spicy Asian dishes. The distilled spirits were simply outstanding. The whiskey, bourbon, and vodka are textbook perfect. The Clearheart Gin in particular was as fine an example of the art as you'll find. It is lighter on the harsh juniper notes and emphasizes the aromatic cucumber, orange and cardamon botanicals.

Our final nights in Iowa were spent in La Mars. This small western Iowa town is the home of Wells' Dairy, the maker of Blue Bunny ice cream. There is more ice cream made in Le Mars than any other one location on earth, allowing the local chamber of commerce to claim the town as the Ice Cream Capital of the World. At 250,000 gallons per day, that's a lot of ice cream (and the town smells like pralines and waffle cones). 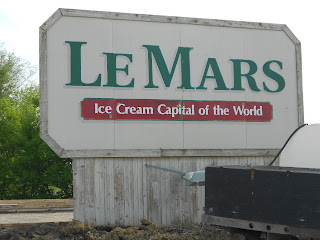 Since it's impossible to survive on ice cream alone, we also made a pilgrimage to Archie's Waeside (http://www.archieswaeside.com/ordereze/default.aspx), a family-owned steakhouse dating back to the 1940's. We enjoyed a 28 ounce, dry-aged, center cut  fillet for about the same price we'd pay for a couple of burgers and pints of beer in Napa Valley. Life is good!

Our last night in Iowa was spent at a small city park in Le Mars. We've been able to find multiple waterside campsites either for free or for under $10/night. It's probably just early in the season. It will be amazing if we're still finding these empty/free spots during the summer. 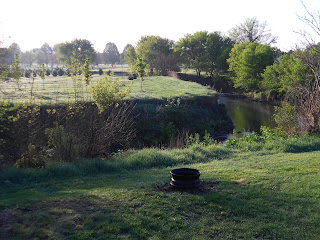