We've done a lot of hiking on the outskirts of Zion National Park, but never made any of the iconic hikes inside the park. One of the reasons is that we just don't like hiking with crowds. Another reason is that we find it insulting to pay a $30 fee to enter "public" lands. Yeah, yeah, we know that those fees pay for cool stuff like flush toilets at every trail head, paved trails, fancy lodges, and overpriced gift shops, but in our opinion, those things all ruin a natural area rather than improve it.

However, on Friday, November 11, 2016, there was a rare enter the National Parks for free day. We decided to take advantage of it and see what all of the fuss about Zion's trails was all about.

Our primary goal was to hit the Angels Landing trail. This hike is always described as the most dramatic in the park. It's supposed to be strenuous and challenging in that there are some pretty dramatic drop-offs as you climb to the top. It's a hike we have often talked about doing since we hit the road in 2012.

Now we almost never do the usual RV "travel blog" posting. There's enough of that out there already, but this was such an unique day, we couldn't resist posting. Someday, this blog post will help us remember this hike even better.

Anyone who has hiked in Zion will tell you the crowds can be a real hassle. We decided to get an early start to try and get ahead of the crowds. We arrived at the visitor center at 7:30 AM and were shocked to see a parking lot that was only 1/4 full. Taking the park shuttle to the trail head put us at the start of the Angels Landing hike at 8 AM. It was 52 degrees and sunny, the weather was perfect,

The trail starts off along the Virgin River and you get a nice view of the top of Angels Landing, dominating the center of the valley. Just 1,500 feet up to go! 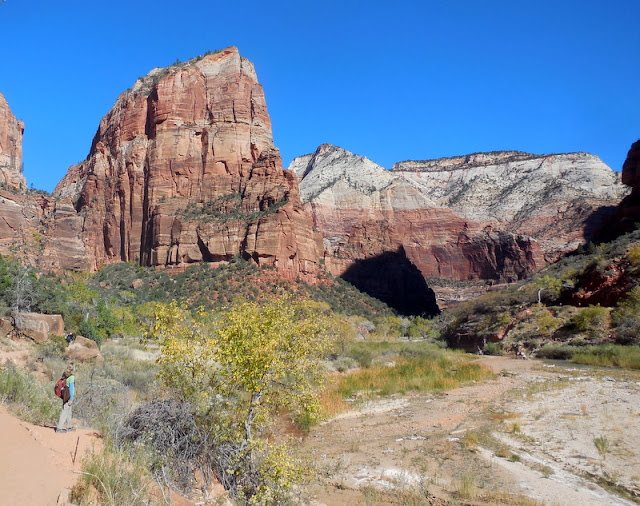 A series of switchbacks carved into the cliffs by the Civilian Conservation Corps in the 1920's carries you up about half way. We've seen work done in the 1920's by the CCC from Maine to California. It's always amazing work that blends in nicely with the surrounding geology. You can't really see the switchbacks in this photo. 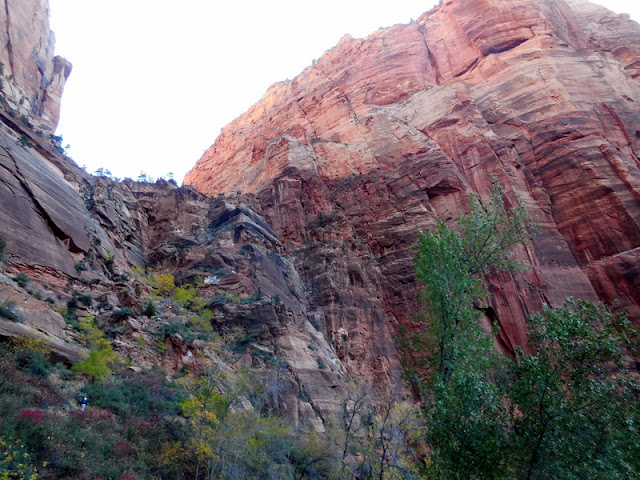 We soon had a feeling this might turn out to be a unique day. We were virtually all alone on the hike. Anyone who has done this hike will tell you that is basically unheard of. This is supposed to be one of the most crowded hikes in Zion. We stopped now and then to look back down the Wiggles. No other hikers! 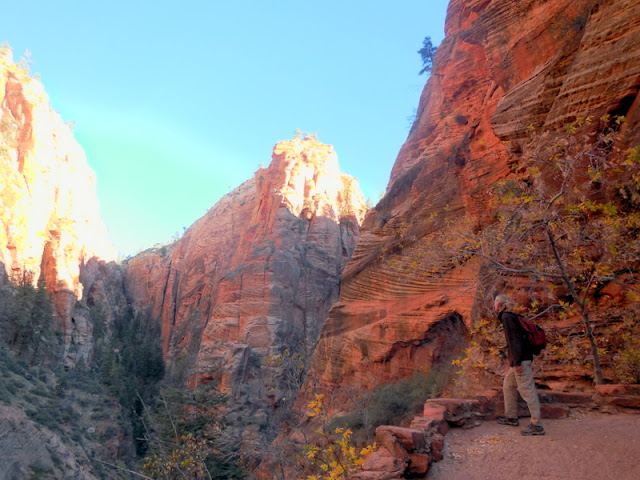 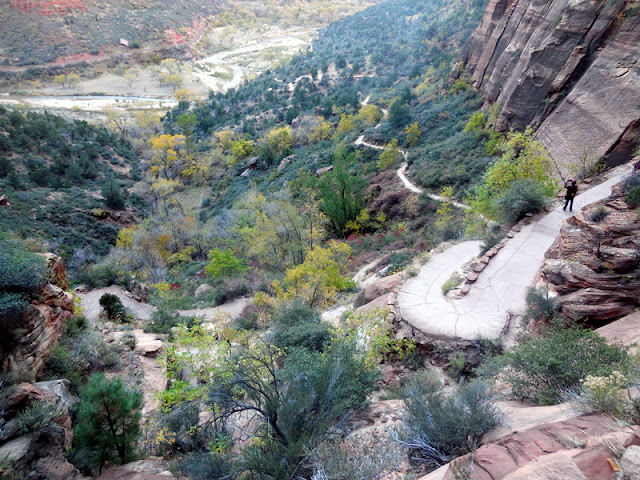 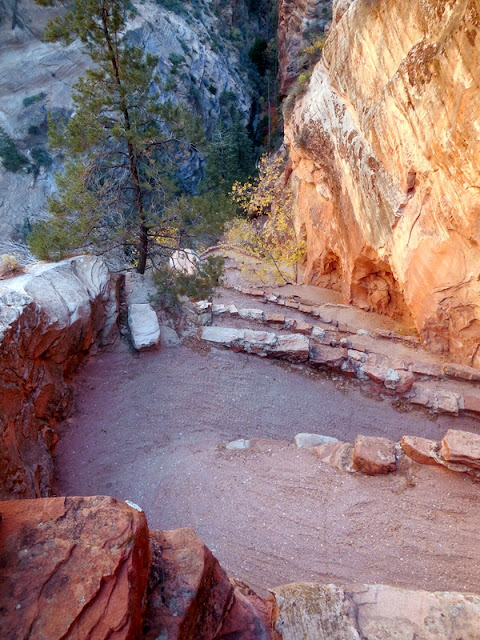 The last half mile of the hike is the famous portion. It features narrow trails with 1,000+ foot drop-offs, sometimes on both sides. There is a nice flat area before the start of the last half mile. The sign at this point warns you about the six people who have fallen and died on this part of the trail since 2004. Susan didn't appreciate it when I wondered out loud "who will be lucky number seven?" This point is known as both Observation Point and as Chicken Out Point. It's your last chance to turn around before the awesome part begins! 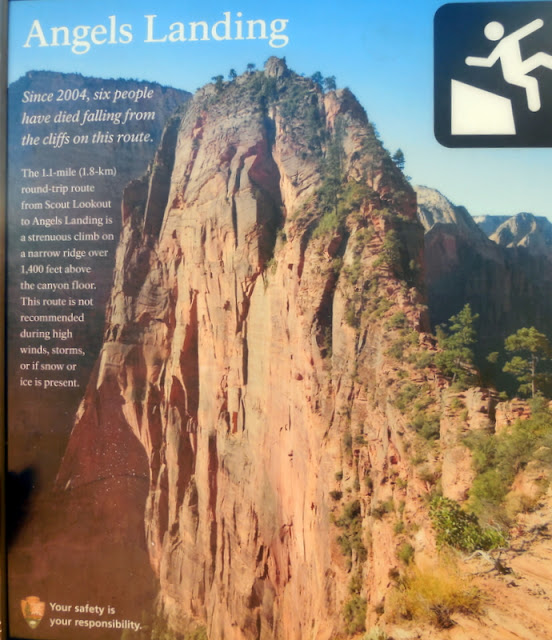 We've heard stories about people taking anywhere from 60-90 minutes to make the last half mile to the top of Angels Landing. It's narrow and largely single file. The combination of crowds and fear of heights will really slow you down. On this day, we were able to do it in about 35 minutes with plenty of time to stop, take pictures, and admire the view.


Susan wanted to focus on her foot/handholds, so I went ahead to take the pictures. 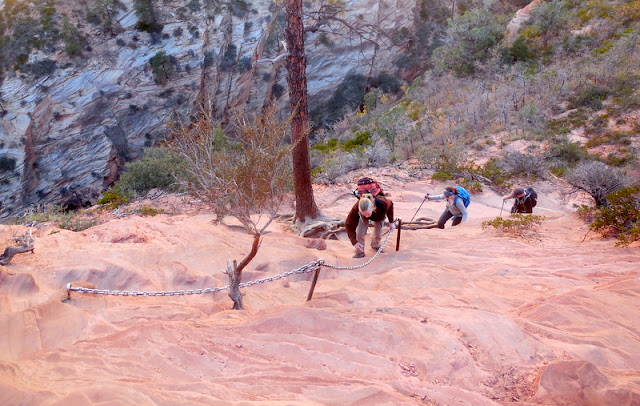 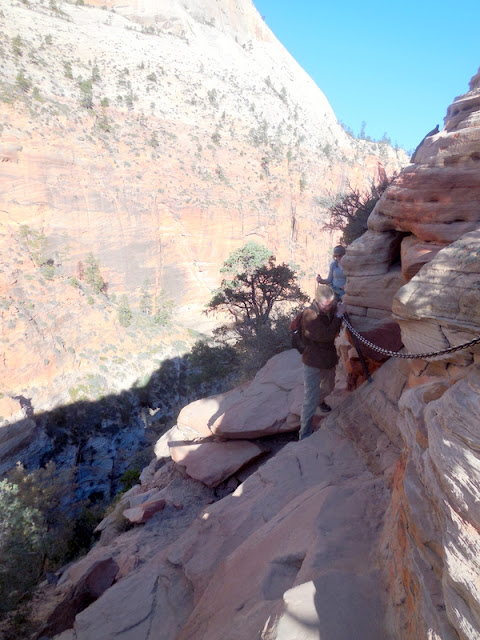 Staring up at narrow spine to be crossed/climbed. 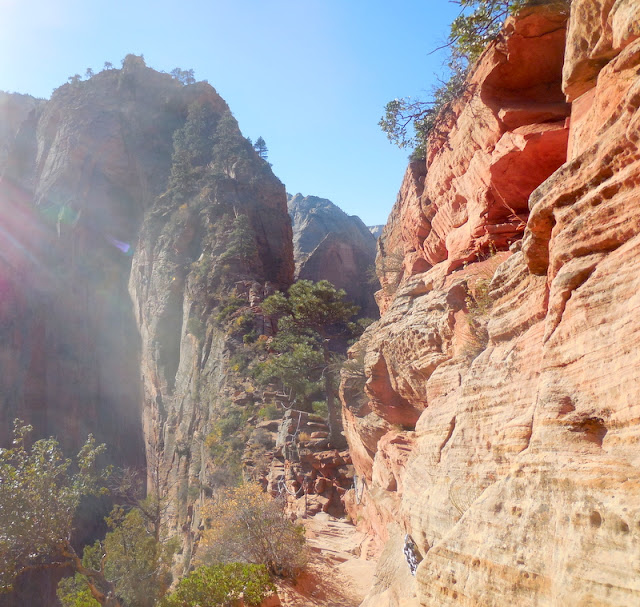 Susan on the edge of a cliff somewhere in there. 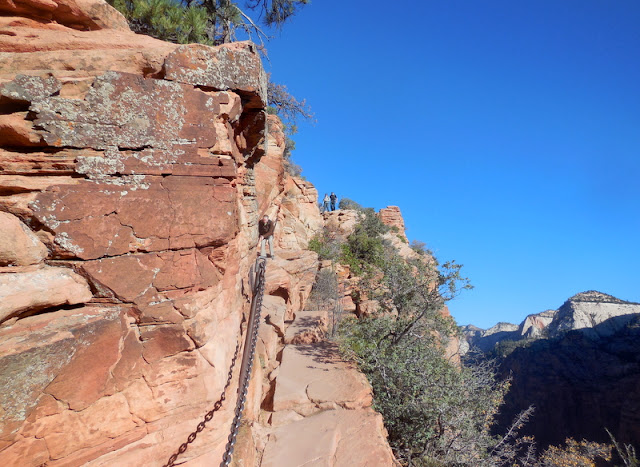 All the strategically placed chains and notches in the sandstone actually made the climb a lot of fun. 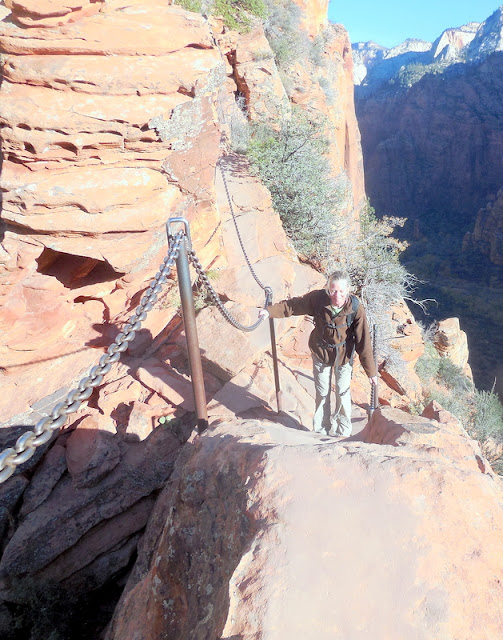 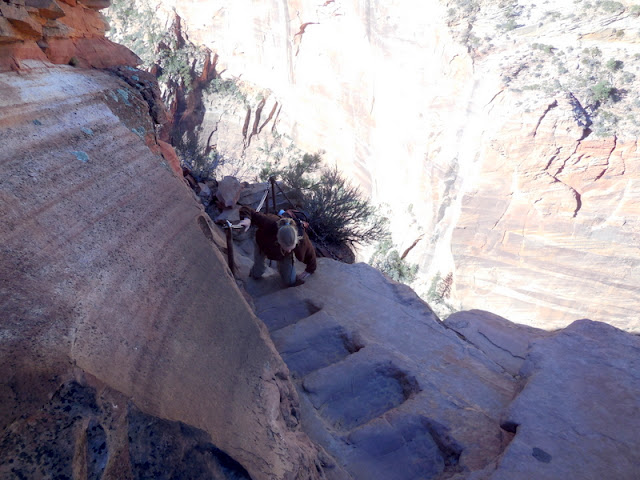 Finally, across the spine to a relatively wide and flat spot! 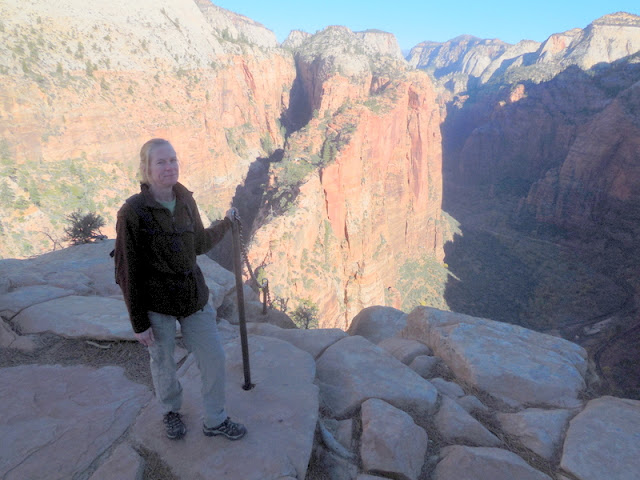 Even when we arrived at the top.... 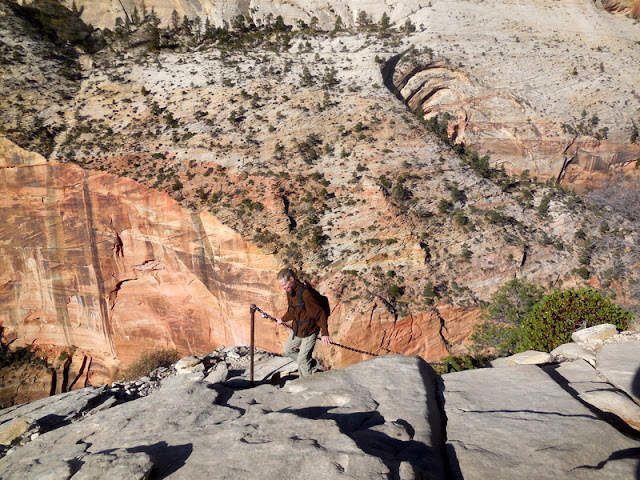 We were all alone on top for about 10 minutes before two hikers behind us caught up! 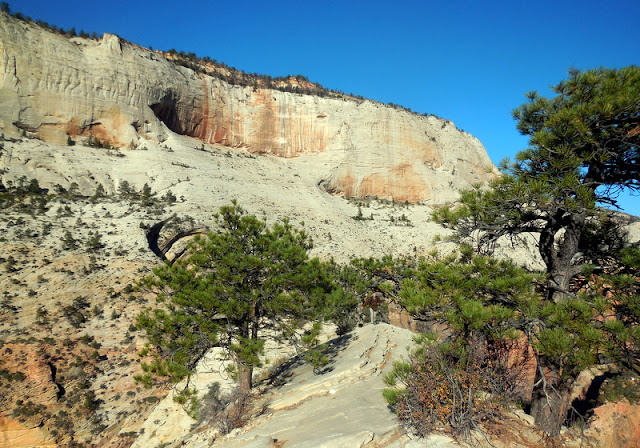 Staring over the edge down into the canyon. 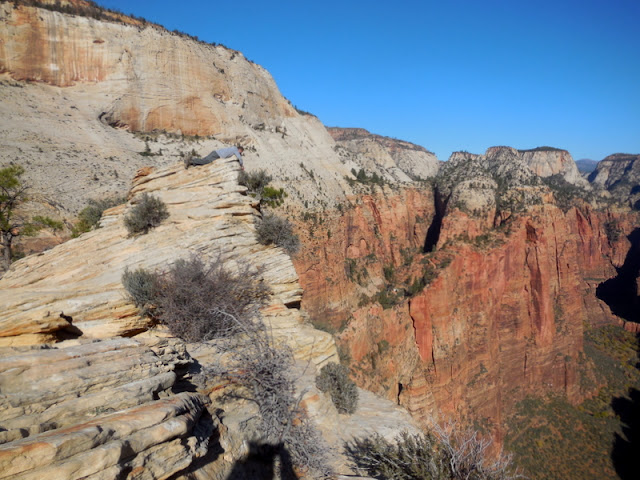 1,500 feet straight down to the Big Bend in the Virgin River canyon floor. One of the double section shuttle buses can barely be seen on the road below on the left. 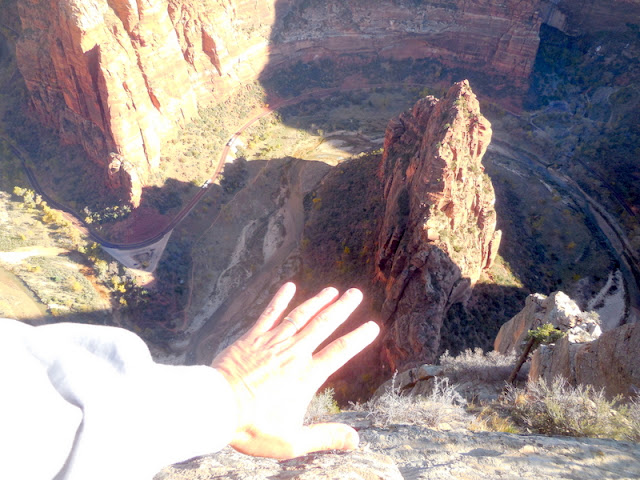 The highest point on Angels Landing. 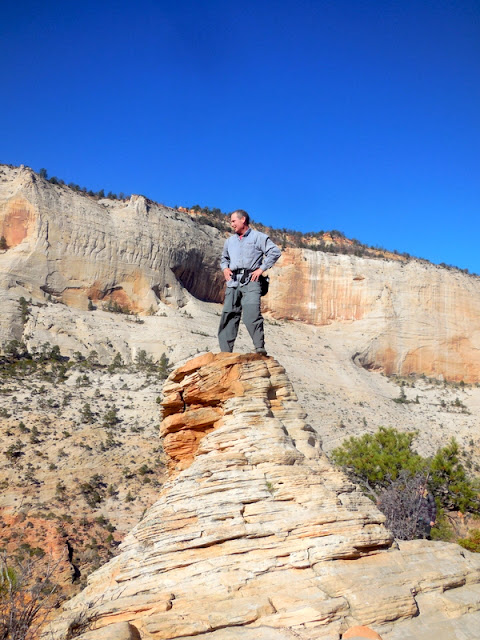 OK, time to head back down and cross that narrow spine again. Surprisingly, going down seemed a lot less "scary" than going up. 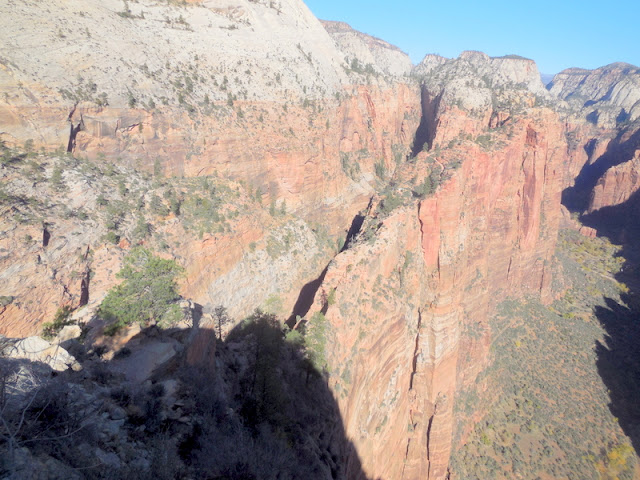 It became a little more crowded on the way down as some of the later starting groups began making their way up. We ran into a lot of teenagers and 20-somethings having real problems with this hike. Either terrified of the heights or just physically exhausted and sweating like they were in front of a firing squad. It took us about 45 minutes to make it down the scary half mile.

After Angels Landing we were able to ride the shuttles to a few other hikes (The Narrows, Weeping Rock, Emerald Pools). Overall we cobbled together about 12 miles of hiking for the day. These other hikes were interesting for their water features, but nothing as off the charts fun as Angels Landing.

Susan at the Upper Emerald Pool. 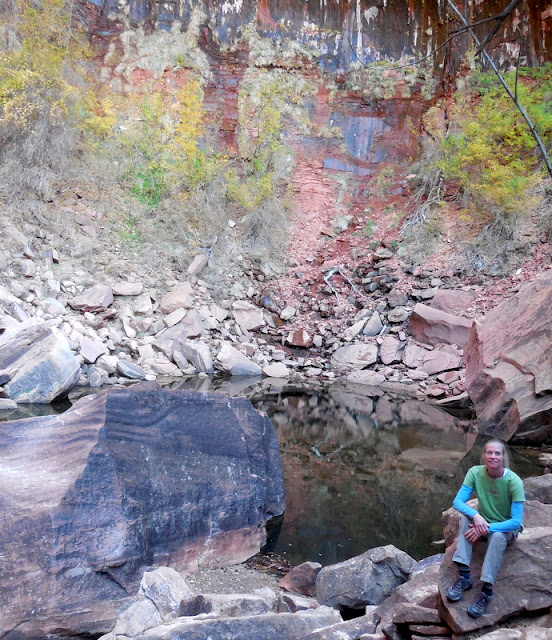 I doubt we could ever hike Angels Landing again after this. The weather was perfect (we barely broke a sweat at any point) and there were few other people. I can't remember the last time I was on a hike where there was a grin on my face the entire time. The best parts of the trail were like an adult jungle gym. The other parts were amazing for their engineering, geological, and botanical value. Sure there are some vertiginous cliffs, but the reality is you would be more likely to be hurt on the Tea Cup ride at Disney than you would be making this hike. For us, this was the ideal Angels Landing experience. That's the way we'll always want to remember it.

And So It Begins

Here we are less than a week from the election and we already have President-Elect Trump vacillating on some key issues on which he based his campaign. Some of the changes are for the better. For example, keeping some of the key provisions of the ACA such as coverage for people with pre-existing conditions and coverage of children under their parents' plan until age 26. In addition, it looks like that wall may not get built on 100% of the border (some of it may be just a fence or an "electronic" wall), and the level of proposed deportations probably won't happen.

However, there are several campaign platform changes that are for the worse. These are items that made a Trump presidency somewhat interesting.

First, he is backing off on his pledge to go for congressional term limits. This would have been the most direct way to "drain the swamp" that is Washington DC and basically render the Citizens United ruling obsolete. Since Democrats love to rail against Citizens United, term limits may have held the potential for bipartisan reform. According to Trump and Republican leadership statements since the election, this issue seems dead.

5. Require price transparency from all healthcare providers, especially doctors and healthcare organizations like clinics and hospitals.Individuals should be able to shop to find the best prices for procedures, exams or any other medical-related procedure.
.....
7. Remove barriers to entry into free markets for drug providers that offer safe, reliable and cheaper products. Congress will need the courage to step away from the special interests and do what is right for America. Though the pharmaceutical industry is in the private sector, drug companies provide a public service. Allowing consumers access to imported, safe and dependable drugs from overseas will bring more options to consumers.

These two platform proposals have now been removed. This is critical because these two items, more than any other proposals from either party, would have made a real impact on reducing medical costs in this country.

If escalating medical costs are not addressed with real change, they will expand and destroy the federal budget (and the ability of the government to raise funds in the bond market) within the next five years and possibly before the next Presidential election cycle. This would have occurred regardless of who won the 2016 election.

If you dislike Trump and the Republicans, this is good news. It could be a Hoover-level destruction of the Republican brand. If you are a citizen of the United States, be very afraid. Especially if you receive any benefits whatsoever from the federal government, are receiving a pension, or pay income taxes. Prepare accordingly.

Will We Burn on Tuesday?


Election day is finally upon us. Thankfully, it will soon be over and we can get back to our long, slow decline as a nation. Each side will say that their candidate will reverse the decline, but if you look through clear, non-partisan glasses, it's easy to see the country has already crossed the Rubicon with regard to our finances and any semblance of the rule of law.

What's interesting this year is that we have two very different candidates. One a status quo, consummate insider and the other an outsider who claims he will "drain the swamp" and pass congressional term limits. One has successfully branded his opponent as "crooked" and the other has successfully branded her opponent as "the second coming of Hitler". As usual, the truth is hidden in between there somewhere. 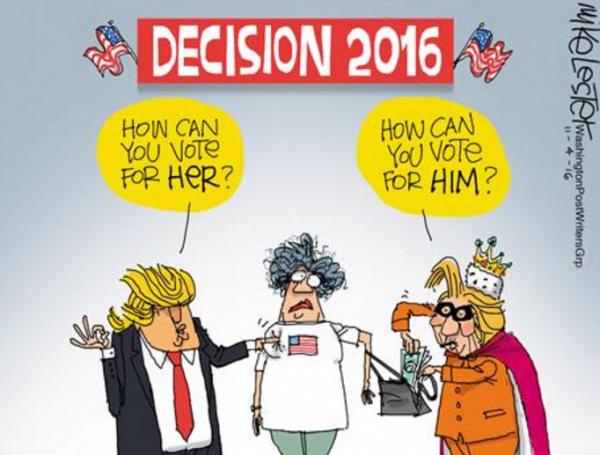 There has been a lot of talk about the chaos that will ensue following this election. Will democrats riot in the streets and turn our cities into debris if Trump wins? Will republicans form militias and talk about armed revolution if Clinton wins? Both sides have already fanned the flames by citing "proof" of potential election rigging.

The news tells us there have been polling irregularities in the past. Even President Obama talked about them in his 2012 stump speeches (especially in Ohio). But they were not supposed to have been significant enough to affect the outcome of an election (with the possible exceptions of Kennedy Vs. Nixon and Bush Vs. Gore). With the huge upside of winning and the low odds and cost of getting caught, this is an election ripe for shenanigans.

Hopefully the losing Trump or Clinton supporters will keep their cool. If not, we're happy to be watching the next several days from a remote boondocking site in Southern Utah.

Have fun and stay safe on Tuesday!