After several months hiking in the warm, sunny mountains of Arizona and Texas, it's possible to look back at a cold, dark sugar beet harvest with some perspective.

One of the quintessential work camping jobs (in addition to jobs such as Amazon fulfillment, some camp host positions, and gate guarding) is the annual sugar beet harvest. To qualify as "quintessential," a work camping job must have a few critical traits:
Most sugar beet harvest positions are found on the North Dakota/Minnesota border and on the Montana/North Dakota border. There are basically four jobs you can do in a typical work camping sugar beet harvest.
Sugar beet harvesting walks a fine line with the weather. It can't be too cold or too warm. It can't rain because the fields get too muddy for the harvest equipment. At some "fancier" processing sites, they have concrete pads for the equipment and sugar beet piles. Our site was an old school dirt pad that turned into a sticky quagmire in the rain leading to further harvest delays.

Typically the goal is to get the harvest in as soon as possible. In ideal weather conditions this could mean 14-17 days of around the clock shifts operating 24/7. In our case, we arrived on September 21st and didn't leave until November 1st.

We chose to work the night shift (7pm to 7am) because it seemed like a novelty and, with a smaller crew, we were told there would be more opportunity to work across all the different types of jobs. We got everything we bargained for.

In a typical sugar beet harvest day shift, you will have a team of six people running each piler and two people working two skid steers to clean up the yard and in some cases lay ventilation piping under the sugar beet piles. If a piler breaks down (which was common at our site), the team of six pulls out their lawn chars and takes a break until the machine can be fixed. Between these breakdowns, having six people on one piling machine, having two dedicated skid steer drivers, and having only light cleaning requirements, working a day shift can be a relatively easy, non-physical job. We saw many day shift piler teams with one or even two team members who were elderly and barely able to walk, bend, stoop, or handle much of any of the physical laber (of course that means the remaining five or six team memebrs have to work harder to take up the slack).

The night shift was a completely different story. At night we would run pilers and process beets with as few as two people (one person running the piler and one person handling all the ground operations). If a piler broke down, and we were unable to repair it ourselves, we would immediately move to another piler and keep the beet trucks moving. At times, we would run two pilers at a time based on truck traffic. We would also simultaneously run the two skid steers for clean up and ventilation pipe installation. To top it off, the night shift would move and thoroughly clean each million+ dollar piler (we had five pilers at our site) and reposition the pilers as needed. We did all of this each night with a team of seven people. In a typical day shift, running two pilers and two skid steers is done with 14 people (and those 14 people don't move/reposition and thoroughly clean the pilers inside and out, that's night shift work). As we came to learn, the night shift is the Special Forces or the Marine Corps of the sugar beets harvest. Night shift had to get more work accomplished with one half of the resources. Night shift team members had to multitask unlike anything seen on the day shift.

We were very lucky to have a good group of people on our team. With only seven people, there wasn't any room for a weak link. If you ever played a team sport, you understand the meaning of "having a good locker room." We had a randomly selected group of seven people, put together for the first time, ranging in age from late 20's to early 70's, working in the wet, dark, cold night for 12 hours at a time, and didn't have any problems. Everyone learned the tasks and everyone did whatever needed to be done next without complication. To have a group like that in any line of work combine efficiently in that short of a period of time is extremely unusual (maybe even a one-off). Given the conditions and work requirements, it could have turned out a disaster or a considerable success. We were fortunate to experience the latter. 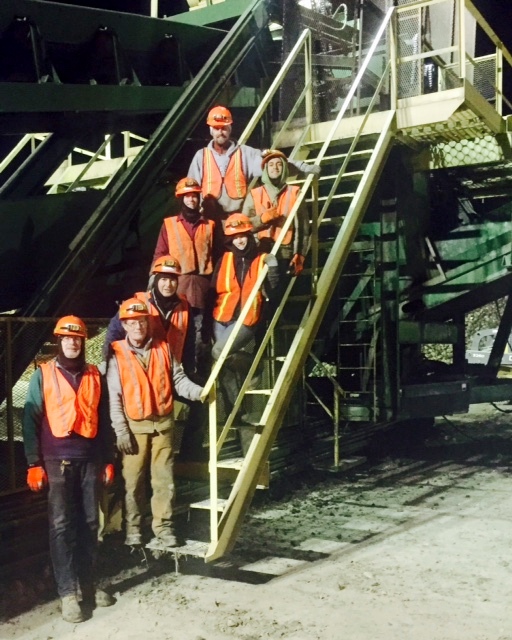 After 13 days in a row of 12 hour night shifts in the dark, cold and wet, the mind starts to play tricks on you.

"The Monster From the Beet Lagoon" 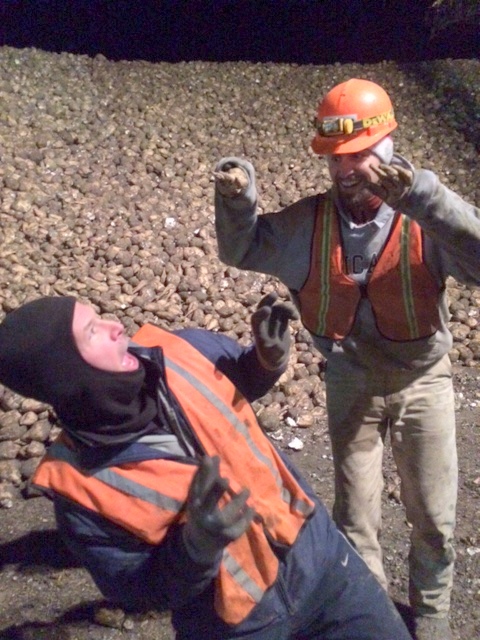 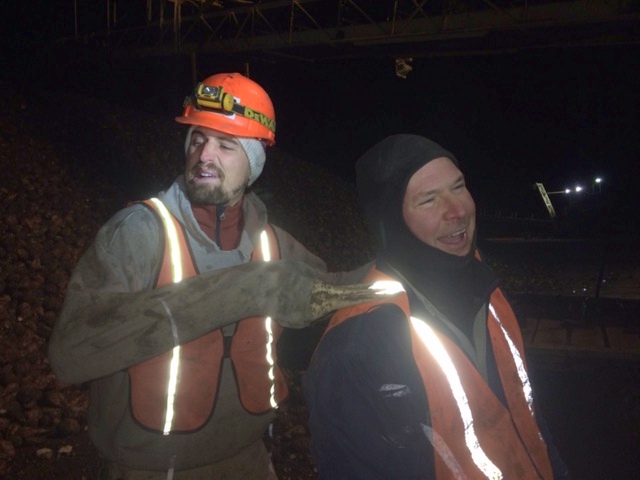 This was some big equipment building huge mountains of sugar beets for future processing. 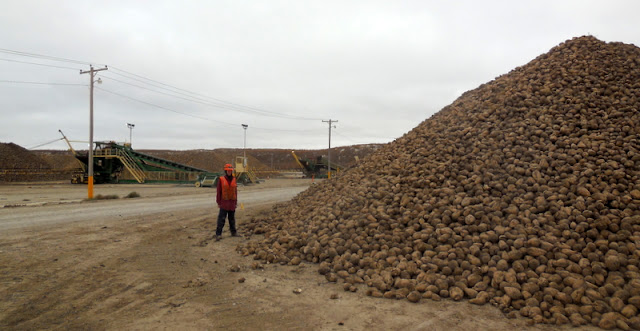 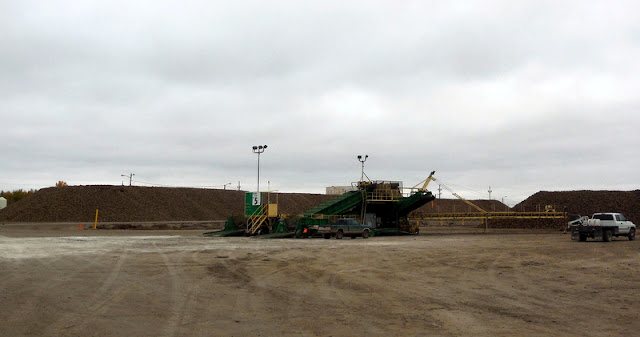